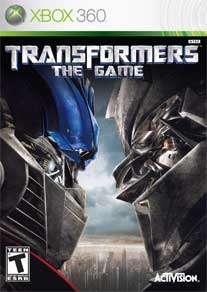 Some games don’t give much away with their titles – take forthcoming release ‘Too Human’, for instance. You’re not going to have that problem with ‘Transformers: The Game’ which, as distinct, say, from Transformers (the movie), or Transformers (the cuddly toy), lets fans of the franchise know exactly what they’re in for.

That’s a good thing, of course, and one of many in this game. If you’re a fan of the cartoons, or the movie, there’s one, single, MASSIVE element that you’re going to want them to get right in a videogame version, and that’s the transformations themselves. In the movie, the way the robots morphed in and out of their vehicle and robotic forms was sensational and a big part of the enjoyment gamers will derive from Transformers: The Game, is how the developer has nailed this aspect. Not only are the transformations cool and exciting to watch, they’re equally good to perform – if you time it right, you can hit the transform button in mid-jump over a building, or freeway, or other obstacles, change into your new shape and, literally, hit the ground running, which is a real thrill.

Admittedly, since you do it so much throughout the game, the novelty of transforming may wear off, particularly for older gamers, but it’s undeniably fun until it does. So what about the rest of the game? Well, many aspects of play are fairly strictly controlled: a single campaign mode of play, for instance, very samey mission objectives irrespective of whether you go for Autobots or Decepticons, and plenty of in-mission time limits that force the player to move on or get kicked from the whole shebang. The campaign is strongly scripted, featuring nice links to the movie, and the whole thing moves along at a very rapid pace thanks to hugely chaotic on-screen action, until you complete the mission. And on that note, some mission objectives are a little vague, resulting in occasional, frustrating re-starts because you’ve failed the mission but still don’t quite know why you’ve failed.

Once the mission’s complete, however, players can hang around and explore a little more at leisure, collecting items to unlock content, experimenting with chucking things around and basically just having fun with the robots. It’s amusing, for a while, to just stomp around the landscapes with the various characters, clambering up the side of buildings like a hugely over-sized Spider-Man or just laying waste to whatever’s dumb enough to stand in your way.

So, Transformers: The Game is sometimes frustrating or repetitive, but it does plenty of other things exactly right. Environments are teeming with life and activity, much of it out to get you, with screaming citizenry, squawking police sirens, thundering tanks, menacing helicopters and heaps and heaps of things to smash, all making for quite exciting and tense battles. And, as we mentioned, the transformations are almost worth the price of admission alone, really doing justice to the franchise. You don’t buy this kind of game for the compelling storyline or complex character development, you buy it to transform into cool stuff and smash stuff and kick human ass and, in that respect, Transformers: The Game is a great success.