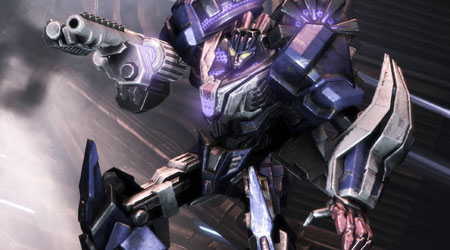 Back for another bout of wanton robotic destruction, the Autobots and Decepticons battling takes place this round on Cybertron, the machines’ home planet. Players once again can fight on either side, choosing from a roster that swells in ranks as you progress through the game.

Based more closely on the original Transformers cartoon series, there are sufficient changes in design as well as execution that the game feels fresh and is, quite possibly, the best Transformers videogame ever made.

Playing out on Cybertron will have most resonance for diehard Transformers fans, but even gamers new to the robot-on-robot shenanigans will appreciate the artistic direction, the flexibility and choice in the game modes and, most importantly of all, the superb transformations. While the controls have been irritatingly reassigned from the previous game, it’s still great fun to have your robot transform on the run or in mid-air without breaking its stride and seamlessly continue its ferocious assault!

New downloadable content, comprising two entirely new characters (Scattershot and Onslaught), three previously available only via Acitivison’s deals with retailers (Shockwave, Demolishor and Jazz) and four new maps (two for the Horde, sorry, ‘Escalation’ mode and two multiplayer) are already available to boost the offering and, for the first time, you can even create your own Transformer and drop him into multiplayer online battles.

Max Everingham is the owner of Game State, a B2B videogame software analysis & marketing consultancy. Max is a videogames veteran, having worked in the industry since 1996, including senior brand & product marketing positions at EA and Codemasters.
Overall
Reader Rating0 Votes
3