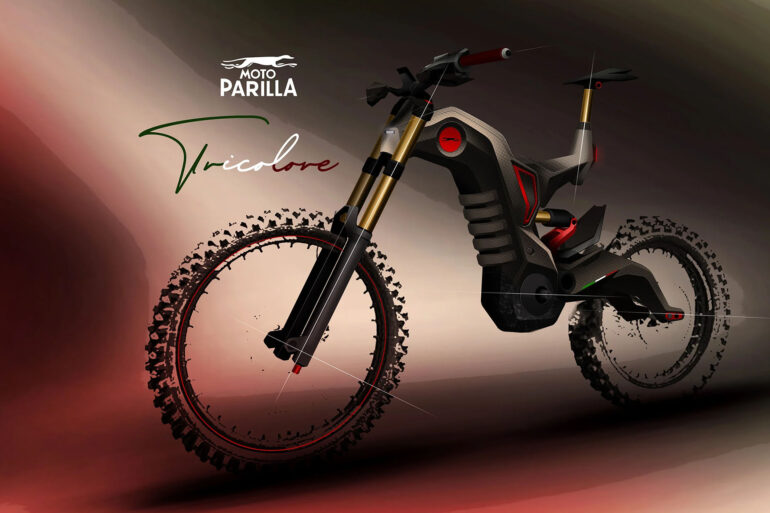 Tricolore, a slick new electric mountain bike from Italian company Moto Parilla, promises a hybrid between the motorcycle and bikes as it is shown off at the International Motorcycle and Accessories Exhibition (EICMA) in Milan this November.

Moto Parilla unveiled a first look at the electric bike following two years of research and development. Heavily inspired by motorcycles, it features a monocoque frame, a bilateral single-arm swingarm, and an interchangeable seat frame. Important to Moto Parilla is its Italian heritage, so each bike’s components will be made in Italy. This includes the powertrain in the Polini EP3 250 Watt model, capable of reaching a peak of 500 watts and 90 Newton metres of torque. With an 880 watt-hour battery, the Tricolore has a range of over 100km.

One of Tricolore’s major features is modularity. Its interchangeable seat frame allows for different types of use, including off-road and urban riding. Along with the variable suspension, interchangeable drivetrain systems and the option of different powertrains, Moto Parilla claims the bike can exceed more than 750 watts of power in some configurations.

Sustainability is another focal point, with various recyclable materials such as hemp fibre used as part of the bike’s non-structural components. The company says these parts will be completely recyclable at end-of-life due to using natural resins throughout the production process.

With the Tricolore’s announcement, the electric mountain bike adds to Moto Parilla’s existing range consisting of the Carbon, Trilix, and custom-made Ultra bikes. No specific pricing or release date details came with the announcement beyond the EICMA event. For Australians keen to check out an e-bike, Moto Parilla lists Overide Products Fat Wheel E-Bikes – based in Western Australia – as an official dealer of its gear. As an indication, an online listing for the Carbon model comes with an $11,000 price tag.

Anything Moto Parilla is well outside of my price range, but the Tricolore looks a stylish option for anyone in the market for a premium electric mountain bike.

Check out the GadgetGuy guide to choosing an e-bike