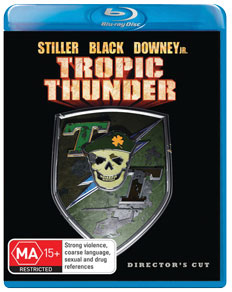 A head-scratching mess of a film from the outset, Tropic Thunder maybe tries too hard to satirise a subject long put to rest, to emerge as strong entertainment. Maybe it would have more relevance if it’d come out in 1988 after Rambo III. Not even the incredibly talented Robert Downey Jr can save Tropic Thunder’s descent into tedium, reducing the intended satire of big budget action movies to inconsistency and flat gags.

Ben Stiller directs and takes a starring role, surrounding himself with enough established comedic talent that you’d think it’d be impossible not to be funny, but for most of its duration it’s clearly catering to a taste that we have yet to acquire. Downey is good, but Tom Cruise steals the show with a genuinely hilarious turn as a maniac studio head.