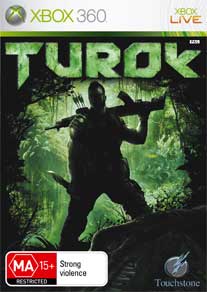 There’ll be two kinds of gamer anticipating playing Turok: the oldie crowd, who fondly remember the brilliant Turok: Dinosaur Hunter original on the Nintendo 64 system back in 1997, based on the fifties comic book, when you could play Space Invaders all day, buy three hamburgers and a coke, get a new pair of shoes and still have change from a dollar. Then there’s the new crowd, the youngsters, who will have no idea that this game, the simply-named Turok, is a descendant of the classic with a whole heap of expectation riding on his shoulders. The latter crowd are going to enjoy Turok a lot more.

For the children of the eighties, though, playing Turok is like stepping back through a time portal, when not only did man roam with the dinosaurs but dark-dwelling ‘creative’ nerds drew macho soldiers with impossibly muscular frames and monosyllabic, grunting dialogue, to satisfy some longing deep within themselves. Coupled with repetitive scenery, so-so graphics and linear progression, there’s nothing much here to either capture the simple pleasures of the Turok universe or offer anything new and surprising to these frazzled first-person shooter veterans.

But if you know nothing of old Turok and are just looking for a good fight, this game could be everything you need. Just as with monkeys in games, it’s hard to go wrong with dinosaurs, and Turok gives you the ability to slaughter them with abandon. There are some good weapons in the game, often with great secondary fire options, but it’s the all-powerful knife attacks that are most satisfying, with dinosaur kills or close combat moves rewarded with a short sequence showing your native Indian hero mercilessly dispatching the enemy with a blade in the guts or head, and then dismissively kicking the corpse away. Not a game for the littlies, obviously.

But for ‘shooter’ fans who don’t care that their enemies are as dumb as bricks, or that the graphics are bland, Turok allows them to thunder around the jungle in their own little Rambo-esque rampage, with plenty of opportunity to spring dramatically from the bushes to thrash the dinosaurs and blast away the bad guys.

And if those fans have mates looking for the same kind of thrills, the multiplayer options, while very ‘me-too’ and demonstrating very little innovation, can be fun for a while, offering a very different setting to the current multiplayer champions Halo 3 and Call of Duty 4.

Turok, then, isn’t the brilliant next-gen reinvention it promised to be, but it’s still a decent action game and deserving of your time if you’re looking for a change from its realism-based counterparts.