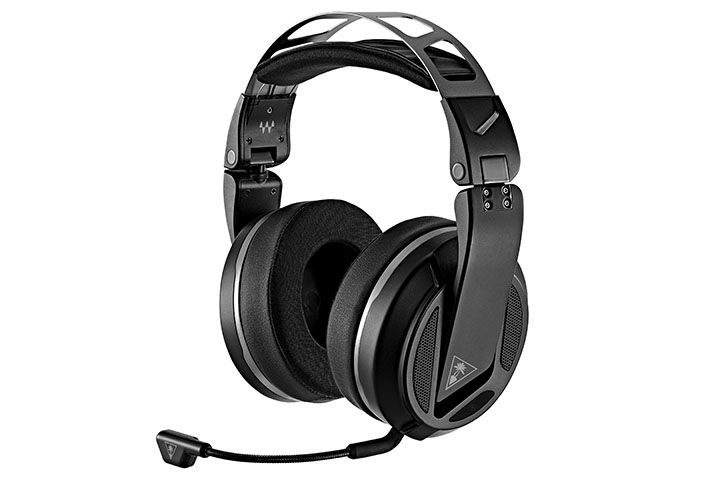 Well, I’m behind the times. When Turtle Beach approached me about reviewing a product, I instantly thought of the days when Turtle Beach was the creator of better-than-SoundBlaster sound cards for the PC. But it turns out that these days, the company’s main game is gaming headsets. Indeed, its X51 from 2005 was apparently the first ever headset for gaming consoles.

Now, fourteen years later, I’m looking at the Turtle Beach Elite Atlas Aero gaming headset, and this is one intended primarily for the PC.

Yes, it will work with consoles. It comes is a 3.5mm cable for the purpose. But on a console you will be wired in, rather than enjoying the wireless functionality available for PCs and Macs, and you won’t get the PC sound tuning capabilities. Since I’m a PC guy, the Turtle Beach Elite Atlas Aero headset worked well for me.

So, what is it? This is a wireless gaming headset. The “gaming” part means that the headphones also have a microphone. This is on a flexible, light-weight boom which plugs into the left earcups. You can remove it or fold it away if not needed. There’s also a microphone defeat switch on the left earcup. The microphone is designed to cancel ambient noise in order to keep your voice clear.

And there’s also a “mix level” control on the left earcup. You adjust this to control how much of the microphone pickup gets mixed into the signal that you’re hearing from the headphones. Useful if you need to hear your own voice on calls or in-game chats.

The headphones use 50mm “Nanoclear” drivers. Turtle Beach rates the “Speaker Frequency Response” at 12 to 20,000 hertz.

They are charged via Micro-B USB – a cable is included – and the battery life is rated at thirty hours, which should be enough for any gaming session.

As with the Xbox, PS4 and Nintendo Switch, you can use them with your PC wired. But most will choose to go wireless.

The wireless connection is not Bluetooth, but something proprietary. You plug a small dongle into a USB socket on your computer and it’s that with which the headphones communicate.

That’s a smart design choice. Some Bluetooth modes are rather slow when it comes to latency – the time delay between the signal and the result – and that can play havoc with gaming. You don’t need more delay added to your own reaction time. How much latency? This test on various Android phones suggests Bluetooth delays of more than 200 milliseconds, up to more than half a second.

I might as well deal with that right now. Even proprietary wireless communications systems involve some latency. In an endeavour to quantify that, I tried using an on-line reaction timer. I measured my reaction time using the headphones, a couple of dozen times with them connected to my computer via wire and then wirelessly. The timer was a bit flaky, sometimes giving unrealistic figures. So I ruled out any result over 300 milliseconds. With wire my times were around 209 milliseconds. Wirelessly, around 224 milliseconds. Turtle Beach doesn’t specify a figure, but I’d say that the wireless connection adds perhaps a 10 to 15 millisecond delay. Which is probably about as small a delay as is technically possible.

In games where reacting quickly to sounds is important, that low latency can give quite an edge. Perhaps in important competitions, you can go wired to respond even faster.

The Elite Atlas Aero headset applies a fairly firm pressure to your head, but I found it fine for a few hours of use. The cups encompass one’s ears, rather than sitting atop them, and that keeps things easy.

I went for a little walk at one point. The wireless connection proved to be solid up to around fifteen metres away.

There are more controls on the headset. The main on/off button is a little recessed, but your fingers will soon learn its location. Above it is a protruding button which invokes “Superhuman Hearing Mode”. The idea of this it to let you listen more closely to what’s going on in the game, perhaps giving you a useful boost in performance. But as we’ll see later, it has another useful function.

Above that button is a wheel for adjusting listening level. This is tied to the Windows output level, so when you twirl it, you’ll get an indication on the screen of the Windows volume level changing.

Above that is the “Microphone Mix” level control mentioned above. But for finer control, you’ll use the Turtle Beach Control Studio.

This gives you very full control over the Turtle Beach Elite Atlas Aero headset. You can adjust the sound using a ten-band graphic equaliser, save your settings, and employ quite a few presets that may suit your purposes.

One the main page are settings to allow you to boost dialogue level, balance the microphone and all sorts of other things. The control facilities cover pretty much anything you could want to do.

For a while there I was quite disappointed. I put on the Michael Murray rendition of Bach’s Passacaglia and Fugue in C minor, played on a monstrous pipe organ, in which the main repeated motif ends on a C with a fundamental frequency of 16 hertz. The bass sounded satisfying indeed with these Elite Atlas Aero headset. 16 hertz or the more dominant 32 hertz? Hard to say. But engaging.

Except that the whole thing was too quiet. I suppose one shouldn’t say this about four century old music, but Bach rocks. If you can play him loud enough. I had the volume turned up to the max, and it was still disappointingly quiet. I was going to whinge about that. But then I remembered the second, more prominent, control button on the headset: Superhuman Hearing. It boosts the level, but does it tailor the sound? Well, on the Audio Settings tab in the control app, there’s a “Superhuman Hearing Volume” slider control. So I figured I ought to test it out.

I pressed the button and the level instantly went up to something satisfying loud. The “Superhuman Hearing Volume” control was at 50%.

But was it doing anything to the sound apart from boosting the level? I dragged the level down to zero and then switched it on and off several times. Nope, no difference. So “Superhuman Hearing”  is essentially a level boost.

Now, to be clear, that Bach recording is at a quite low level of modulation. I didn’t need “Superhuman Hearing” on for satisfying levels from The Marshal Mathers LP. Well, maybe just a little.

Anyway, I blame Europe. The European Union has very silly rules about the maximum output of personal audio devices. I haven’t examined the rules for gaming headsets, but those for portable audio players are simply ludicrous.

My theory is that Turtle Beach has to limit the amount of gain on its headphones to comply with similarly idiotic rules for gaming headsets. And “Superhuman Hearing” is a legal workaround to those rules.

The problem isn’t really with stuff from Eminem. That is recorded at a high average modulation level. As are games. But if you’re listening to a Telarc digital recording from the 1970s or 1980s, plus plenty of other early classical digital recordings, they are at low average modulation level, and the limitations on maximum output with loud stuff mean way-too-low output with soft stuff.

So, Turtle Beach, thank you for the workaround.

That Bach came through with powerful, impressive bass. But as the Passacaglia section progresses, it increases in complexity, with layers on layers of pipes over the top of each other. It all became a bit messy listening with the Turtle Beach Elite Atlas Aero headset, a bit confused.

To make sure I wasn’t mis-remembering, I went back to my current favourite reference headphones, plugged them into an Oppo portable headphone amp which was in turn plugged into my computer and played back the offending section. Yep, that was how it was supposed to sound. It’s funny how often gear that sounds good with modern music has its wheels fall off a bit with classical at high levels.

But I don’t want to overplay this. Most modern music, including that Eminem stuff, is less complex and was competently delivered. In fact, once I’d made suitable EQ playback settings, it was very enjoyable. The headphones, in addition to the strong bass, are powerfully punchy.

By default – or using the “Signature Sound” setting in the Audio Settings – the treble is prominent, verging on nasty. Dragging down the 1kHz, 2kHz, 8kHz and especially the 4kHz sliders tamed that.

That’s fair enough. A gaming headset is going to be optimised for locating sounds in space, a slightly hot treble helps in that.

So, just do that adjustment in the Audio Settings tab of the controller and save it to a preset – I called it “Music” – and switch that EQ setting on when you’re feeling in the mood to partake of a little music.

I’m not really a gamer, which is why I focussed on music sound. But I went to YouTube and played a bunch of game play clips, playing around with the 3D Audio settings in the Turtle Beach Control Studio, and the Game Spatializer.

I have to say, the games sounded very exciting. Gunshots delivered a power punch. Sounds seemed well located in space. One game had wonderfully eerie binaural recording that could convince one to abandon speakers and stick to headphones all the time. The eeriness was carried through brilliantly by these headphones.

Windows reported that the digital audio quality for both recording and playback with the Turtle Beach Elite Atlas Aero headset was locked into 16 bits and 48kHz sampling. I haven’t examined games, but the standard for movies is 48kHz (as opposed to CDs and most streaming music, which is 44.1kHz – don’t worry, the computer will convert the sampling frequency).

A bit of googling around suggests that some games use 44.1kHz but most use 48kHz (and “a few of them mix both … stupid devs”), so a fixed 48kHz seems a sensible choice.

I tried some recording and playback using the Turtle Beach Elite Atlas Aero headset to see how it sounded. Using the playback EQ settings I’d been using for music, my voice sounded pretty dead, lacking upper harmonics. Even with the “Signature Sound” EQ, it was a little dull.

I plugged a Blue Yeti X microphone (review to come in a few days) into the PC, and re-recorded the same words I’d previously spoken. Then I played them back. Now they were lively and clear and realistic.

To be clear, you’ll be using the microphone on the Turtle Beach Elite Atlas Aero headset primarily for communicating with fellow gamers, not recording the vocals of the latest opera. And you can tweak the frequency balance with the EQ facility. Just don’t expect a lot of high fidelity from it.

The Turtle Beach Elite Atlas Aero wireless gaming headset is a first glass set of gaming headphones. With very low latency and a strong, dynamic performance, gamers should love it.

ASUS ROG Phone II – so much speed it should be illegal