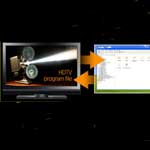 Ethernet and the internet

If you have a home network, especially one based around a router (into which all your computers are plugged, which in turn connects to the internet), then you can enter the world of media streaming. This can work both ways.

Using the facilities in the freeware program Winamp, you can easily create a ‘playlist’ that the TViX 5130 or 4130 PVRs can use to access internet radio stations.

With a TViX PVR, music, videos, internet radio, photos and other computer files can be delivered to your home entertainment system.

The stations available are those that use the SHOUTcast format, which means that there are many thousands of these stations you can listen to. Imagine your home entertainment system no longer being limited to the dozen or so radio stations in your local area, but being able to tune into a foreign news service, or a US country music station, or a Middle Eastern broadcast!

Using a network connection, these PVRs look like ‘NAS’ (which stands for Network-Attached Storage) to your computer. At this level, things get pretty technical, but it means that anything you can do with your computer’s own storage can also be done with the contents on the TViX hard drive, including sharing them with the internet.

If you want to achieve independence from a wired network, for about $40 you can purchase a wireless LAN adaptor that plugs straight into one of the two USB ‘host’ type ports. This allows you to stream those same radio programs without bothering to wire your home for networking, so there’ll be no need to trail messy lengths of cable from the computer in the study to your home entertainment area.