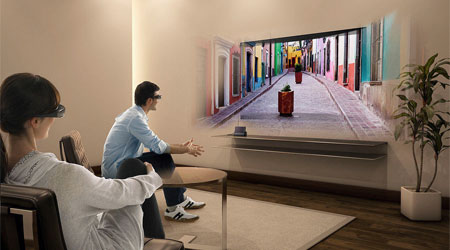 2010 will be the year 3D becomes available to the living rooms of Australia, with Panasonic to offer a complete “out of the box 3D solution” by mid-year. This means a range that will include a 3D Blu-ray player, a series of 3D Viera plasma full HD televisions, plus the necessary eyewear. It’s also likely that 3D Blu-ray movies will be part of the purchase package.

Sony, too, will flood stores with 26 new Bravia LCD televisions from this month, including seven 3D models and 21 with the ability to access 15 free internet TV channels (IPTV) over a home broadband network. Eleven of the 15 free ‘Bravia Internet Video’ channels will be available from this month, and include specialised programming, video on demand and catch-up TV services from SBS and Yahoo7. Curiously, though, Yahoo’s Channel 7 programming is not available via Tivo, which is part-owned by Channel 7, and the ABC’s popular iView catch-up service, which is available on the Sony Playstation 3, is not part of the Sony offering.

More broadband entertainment channels will be added over time, says Sony, and while many will be free some may offer pay per view content and movies, with the Sony Pictures catalogue being a likely – and ready – source of programming.

Samsung, too, will have a strong line-up of TVs from April, and with 3D appearing in LCD, LED LCD and plasma, the company is showing no prejudice as to a best platform for the technology. Samsung will also provide a suite or streaming video channels and a Widget gallery for its large range of Net-enabled sets, plus the ability to Skype from the big screen available in select models to boot.

I can’t recall a time when feature sets have been so strong. 2010 will be a hero year for TV in Australia, and an absolute gift for home entertainment lovers.

The 3D demonstrations we’ve seen are genuinely impressive, providing an authentic re-creation of the cinema 3D experience. See it and it will be hard not to want it, and that’s despite its premium price – $4000 to $7000 on initial reckonings – and the lack of native 3D movies. You’ll need this too, because proper 3D is a system requiring content, a player and a display with active shutter glasses. There is a psuedo 3D system that converts standard video to 3D, but it’s like the simulated surround experience – OK, but not a patch on the real deal.

Despite it’s appeal, 3D is not something that will receive an outing every day of the week. You’re unlikely, for example, to watch the news or breakfast TV in 3D. So 3D is for event viewing, and while some commentators claim it’s the biggest thing to happen to TV since colour, it should be remembered these words, too, were said of digital TV, then high definition, then Blu-ray. All of these emerged in the last decade, which not only says something about the rapid rate of development during this period, but should make us all wonder what innovations we can expect in the next ten years.

Consider 3D, then, as just one of a suite of many compelling possible features in your next TV. And because the technology will appear only in premium model flat panels, your 3D telly will, by default, deliver a superior conventional 2D experience.