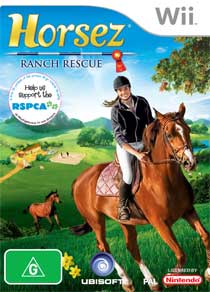 Ubisoft, one of the world’s largest video game publishers, is encouraging Australians to become pet parents in the virtual world, announcing a partnership with the RSPCA to celebrate its PETZ range of games for Nintendo DS, Nintendo Wii and PlayStation 2.

Ubisoft will contribute a percentage from the sale of selected games in the Petz series to the RSPCA, to further support their work in animal welfare and encourage Australians to be the best pet owners they can possibly be!

Many Australians continue to buy pets, only to surrender them after realising they cannot adequately care for their new furry friend. The RSPCA takes in around 138,000 animals every year, including more than 69,000 dogs and 55,000 cats.

RSPCA Australia CEO, Heather Neil, said the RSPCA is endorsing selected games in the new Petz series as a fun and educational way to explore the delights of day-to-day pet ownership, before making the significant decision to become a pet owner.

“Taking an animal into your home is a big decision that should not be taken lightly and education should play an important role in the decision making process. We are delighted to announce our partnership with Ubisoft and we encourage potential pet owners to explore the basics of having a pet in the virtual world.”

Edward Fong, General Manager for Ubisoft, said that Ubisoft was proud to support the ongoing great work of the RSPCA.

“Petz is both a highly entertaining and educational game that will be popular with both adults and kids alike. We are proud to be able to support the RSPCA’s ongoing work as an advocate for animal care and protection, and are glad that the new Petz series can contribute to the work of this worthy cause.

“Also, given owning a pet costs the average Aussie household approximately $500 a year, the game is a great alternative for parents under ‘puppy pressure’ and who may not have the space, time or money to invest in a pet.” said Edward.

The Petz series spans a range of different animals including Dogz, Catz, Bunnyz, Horsez and even Hamsterz!
Each game takes you through a series of levels, presenting a new raft of challenges as the Petz grow older, mimicking the animal characteristics of pets in the real world.

The Petz series are now available in-store at major retailers. Prices for the games vary, depending upon the game and the platform, ranging from $29 to $59.