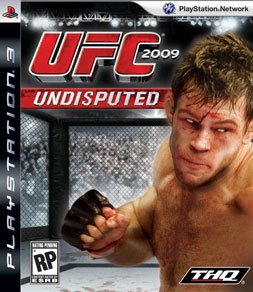 A lot of the success of entertainment, whether it’s a good book, a movie, a videogame or even celebrity watching, is down to the consumer ‘living vicariously’ through the actions that medium describes. For videogames, it’s probably even more fundamental, since you’re directly involved, and your actions directly influence and drive the outcome of the entertainment: play well, and you’ll win the footy game as an all-conquering hero, play badly and your team is defeated, spirits crushed and they troop back off to the changing room with their heads hanging in shame. Games give players the opportunity to experience something of the real-thing without any of the hardship; a special forces soldier deep in enemy territory, a space-faring species encountering new worlds , a world-class racing driver, a rock legend or the star player on a sports team, experiences that would normally simply not be available to them otherwise.

And so it is with Ultimate Fighting Championship (UFC), with knobs on. What red-blooded young male hasn’t dreamt of being a hard-as-nails professional fighter, taking on all comers and emerging bloodied but victorious from combat? Rocky started it and, for the 30-plus years since, there have been countless copycat movies for us to feed our dreams. And UFC is the daddy of ring fighting – octagon fighting to be precise, I guess – given its all-embracing nature of welcoming the best fighters from any discipline and the fast, brutal action its fighters can provide.

Several UFC-themed games have come and gone, but none have sufficiently captured the true nature of the combat. Despite the wealth of fighting styles to model and the massive variety of moves to animate and weave into tactical showdowns, no development team has been able to properly convey UFC fighting. UFC 2009 Undisputed changes the game.

Animations are superbly realistic, collision detection virtually flawless and, for once, using tactics actually results in better fights. Previously, the ground game (where, incidentally, over 70% of real fights end up) was not only ineffective but incredibly frustrating, resulting in far too many defeats that felt unfair. Here, the grappling, position changing and submission moves are integrated extremely well, putting the action back on a more solid footing that feels as if it’s rewarding good play. One tip though – play through the tutorial first.

Most tutorial modes in fighting games are pretty dry, and this is no exception, but with UFC 2009 Undisputed it’s absolutely essential if you want to learn how to play the game properly. There’s a lot to take in at first, but stick with it, acquiring a few reliable moves at first and then adding more as you get the feel of it, and UFC 2009 Undisputed grows into not just the best simulation of UFC ever made, but one of the best fighting games too. Building a fighter in your own image in Career mode is great fun, and extremely rewarding when you win but oddly instructive and helpful even if you don’t. This is the first game for years that we’ve repeatedly gone back into practice mode to hone skills and faithfully followed the gym regime of training, sparring and practicing with visiting fighters before taking on actual scheduled fights. And that’s principally because practice is rewarded in the game, dramatically increasing your ability to emerge victorious from a contest.

The only major criticism with the game is that the fighters, irrespective of weight division, all move about a quarter the speed of the real thing. Since the speed is turned down for everyone, it’s not such a big deal for the game, but it will almost certainly deter more mainstream gamers or casual fans of the sport, because they’ll be too accustomed to the far faster pace of titles such as Street Fighter IV and in that respect there’s a real missed opportunity. Otherwise, however, UFC 2009 Undisputed is brilliant.

UFC 2009 Undisputed is available for PlayStation 3 and the Xbox 360.