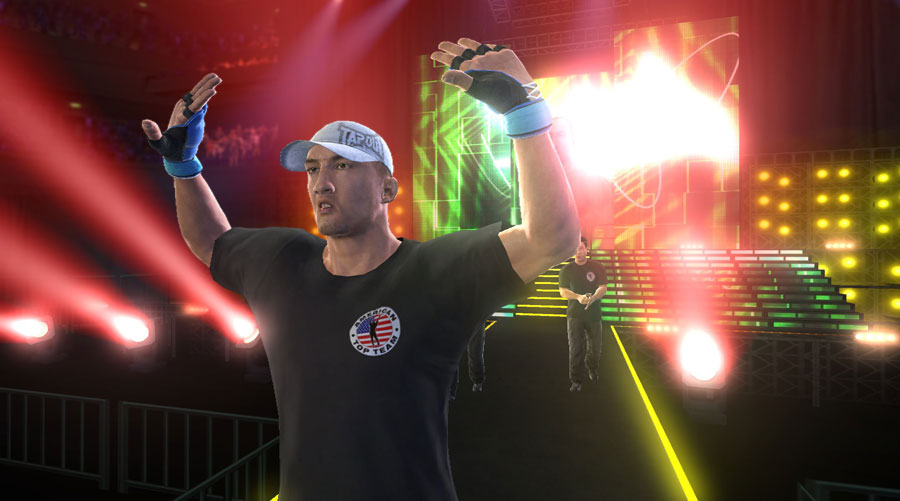 One of the Holy Grails when creating any sports videogame is nailing character animation, so that the athletes in the game look and move realistically.

EA spends gazillions of dollars each year aiming to achieve exactly that with their Madden, FIFA, NHL and NBA games, but not every games developer has the same level of funding to create animation so realistic that players maintain that Stoppardian ‘suspension of disbelief.’ However, publisher THQ – employing Japanese developers Yukes Future Media Creators – s appear to have done just that in UFC 3.

Yukes’ rendition of UFC is one of those games that has a fairly steep learning curve to begin with, because despite a very good tutorial system that takes you through every standing strike, clinch, shooting maneuver and element of ground work, about half way in you start to panic trying to remember all the button combinations. UFC 3 uses everything, about 20 times each.

That’s a bit of an exaggeration – it might be only 19 times – but beyond the regular face button and stick moves, you can ‘modify’ strikes using the shoulder buttons and triggers, all of it getting complicated fast.

It doesn’t help that the tutorial is incredibly loooong, chiming in with 62 separate tutorial segments – that’s right, 62! It took me over 50 minutes to work through it, trying each tutorial once.

But that doesn’t really matter, because you can get by in the early fights just using a few button combinations if you like, and it’s such good fun beating the daylights out of each other. The competition stiffens after a while, though, so it might be a good idea to keep the manual handy, or do as we did, using a notebook to jot down our favourite, most effective moves that included a few advanced, complex tactics.

As you begin your fighting career, there are some really nice touches. When you win (or, indeed, lose) your first fight, you’re treated to videos of real-life UFC fighters relating their own, very first match. It’s inspiring, and makes a credible connection to the true-life sport.

The commentary is a standout when it comes; there is some repetition, undeniably, but for the most part it’s accurate and feels as if the commentators are really following your matchup, chiming in when you do things like score a great uppercut, or go for a submission with relevant observations.

During battle, the path to success lies in figuring out the most effective strategy against whatever opponent you’re facing, with a ton of variation. That means you have to constantly switch up your tactics, and it’s not only the obvious ones that count. You can, for example, win a fight by continually striking the other guys’ legs, rendering him weaker and less able to shoot for a takedown and, eventually, making the ref call a halt to proceedings.

UFC 3 is a tactical challenge and one of the best fighting videogames available today. The only downer is the horrendously over-engineered front end of the game, which loads screen after screen of redundant information, loads again, puts up another screen, loads again, until you’re just begging the game to get on with it and put you in a fight. It’s tedious, and needs to be changed next year, but it’s worth putting up with just to get to the meat of the game.