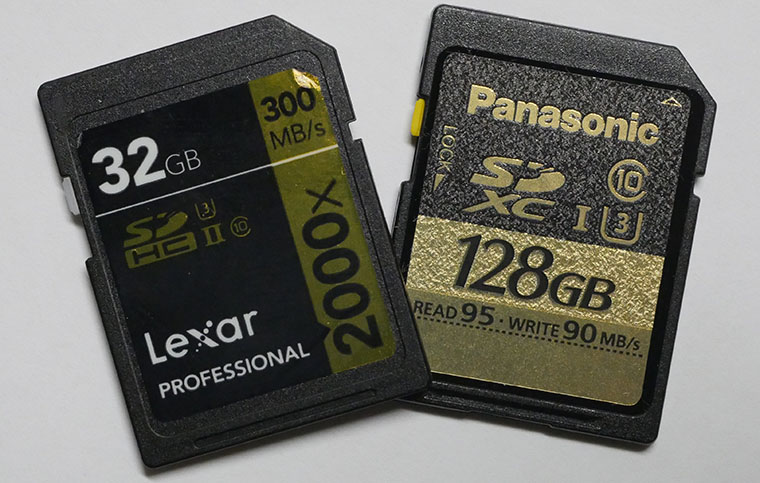 I recently got ahold of a lovely new Panasonic SD card. Lovely? Is that an appropriate word for something as mundane as a Secure Digital card?

Perhaps. But this one is rated UHS Speed 3, and has a capacity of 128GB. The recommended retail price is an impressive $349! It conforms to the UHS-I bus standard.

I’ve explained all that in this article on SD cards but, in short, UHS is a newish standard which allows faster data transfer using the same old arrangement of contacts that SD cards have had forever.

So the question arose: what would be the speed difference between that card and a Lexar SD card, also with UHS Speed 3 rating, but which supports the more recent UHS-II bus. UHS-II adds eight more contacts, but arranged in such a way that they don’t interfere with the card’s use with older card readers. Of course, they won’t read and write as quickly, either, in such readers.

Testing was straightforward. I took one very large file – a 7.25GB video file – and copied it to each card from my Windows computer’s very fast SSD via USB 3.0 using the Lexar Professional Workflow SR2 SD card reader (reviewed here). I used that because it supports both UHS-I and UHS-II. Then I copied the file back from the card to the computer (with an ejection and reinsertion between the two copies in order to make sure cached data wasn’t used).

Then I repeated it with a shiny new MacBook Pro 15 inch, just to be on the safe side, with effectively the same results.

There was only one wrinkle in proceedings. The first time I tried to copy the file to the Lexar card it just wouldn’t happen. It took me a moment to work out why. The Panasonic card is SDXC, which permits capacities larger than 32GB. The Lexar card is only 32GB and is SDHC class. SDHC cards are formatted in the FAT32, SDXC cards use the exFAT format. FAT32 is limited to 4GB maximum for any file, which is smaller than the video file. It only took a moment to reformat it to exFAT.

So UHS-II looks like it really does offer substantial speed increases. Writing to the UHS-II card took only 35.7% of the time taken to write to the UHS-I card. For reading the UHS-II time was 35.3% of the UHS-I time.