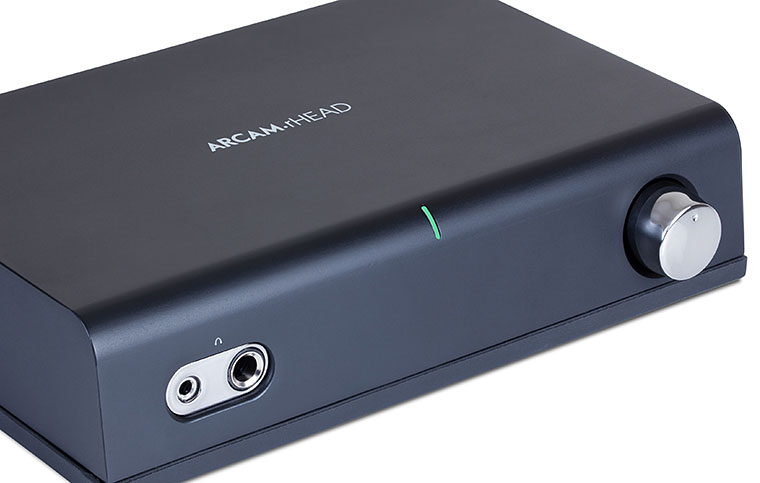 We frequently cover headphones in these pages, but something that receives less coverage is the amplifier that drives them. The fact is, not all headphone outputs are the same, and some are positively terrible with certain types of headphones, and some just won’t go loud enough. UK hifi firm Arcam has both analogue and digital products to provide first class headphone sound.

The analogue product is the Arcam rHead. Operation’s simple. You plug the output of your device into the back – regular RCA sockets or, for those with high end gear, balanced XLR sockets – and flick the switch to choose the input. Then you plug your headphones into the appropriate socket on the front – 3.5mm and 6.5mm stereo sockets are provided – and adjust the volume level with the knob.

Why bother with a product like this? First, it offers ultra high fidelity performance specifications. Noise, for example is -109dB (two volts output, 32 ohm load). All that means is that you will hear no noise created by this device, no matter how loud you turn it up.

Another important specification that few companies quote: the output impedance is less than half an ohm. Meaning? The rHead cannot affect the tonal balance of your headphones. We went through a long period of history where figures of up to 300 ohms impedance were thought appropriate, but this often just wrecked the sound. Arcam is doing it right.

(Take my word for it on that one. The explanation is very technical.)

Finally, it supports headphones with impedances of 16 ohms up to 300 ohms. The former are typically earbuds, while the latter are usually high fidelity headphones. It has stacks of power: up to two watts into those 16 ohm headphones. Listening with that level of output will damage your hearing in minutes, so be careful. But you’ll never have to worry about it running out of oomph.

That’s for any analogue source, from the headphone output on your MP3 player, to a high end digital media or CD player. For digital sources there’s the Arcam irDAC-II. Neither is this cheap: $1195.

But this one is more the dual purpose device. In addition to being a headphone amp, it is a high end Digital to Analogue Converter. Some audiophiles prefer to use an external DAC with a CD player. A more common use these days is with a computer. The irDAC-II has a USB-B socket – the kind you see on printers. Plug it into a Mac computer and it becomes an audio device, delivering measurably higher quality audio than the Mac’s own outputs. Likewise for Windows, except that you need to install a driver (software that allow hardware to work with the operating system). At least until the next major update for Windows comes early next year.

The irDAC-II also supports Bluetooth (it even has a little antenna that screws onto the back). Here there’s also a focus on quality with it supporting not just the standard SBC codec, but also AAC (higher quality for Apple devices), aptX (higher quality for premium Android devices) and aptX-LL. That last one is like aptX except without the processing delays. “LL stands for Low Latency”. Regular Bluetooth can delay the sound by up to a quarter second. aptX brings than down to 0.17 seconds, which still makes for a poor match between moving lips on a screen and the sound you’re hearing. aptX brings that down to just 0.04 seconds, improving the viewing experience, and especially the gaming experience.

The headphone output is 3.5mm only and the fine specifications of the rHead aren’t quoted, so I guess it isn’t as high end on the analogue side. I suspect the headphone part isn’t the main purpose. Instead the ability of the unit to support digital signals with sampling all the way up to 384kHz along with regular and double speed Direct Stream Digital suggests that the high fidelity system functions are its main role.