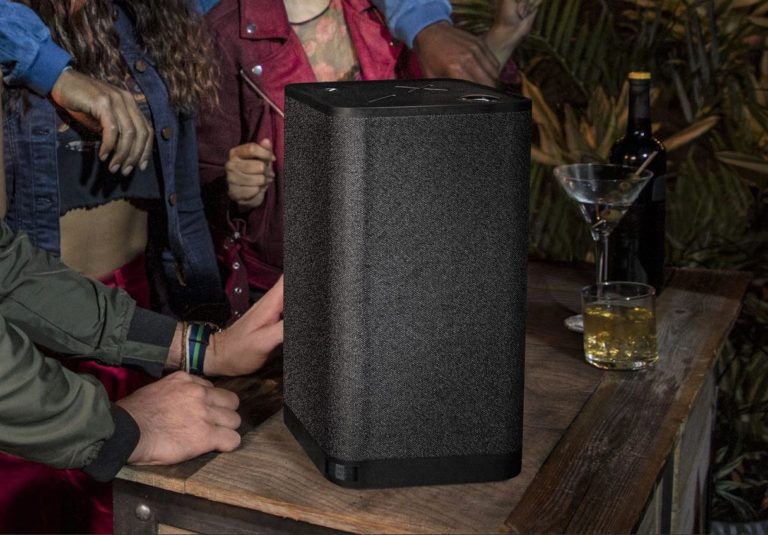 The Ultimate Ears HYPERBOOM is the ideal transportable speaker to play The Best of Uriah Heep: Loud, Proud and Heavy for it describes the HYPERBOOM so well.

Proud – The Ultimate Ears HYPERBOOM stands tall among diminutive Coke-Can style BT speakers. In fact, it is 364mm tall and 190mm square. You have to push a lot of air to get a lot of bass.

Heavy – The Ultimate Ears HYPERBOOM weighs in at 5.9kg, so its luggable with a 24-hour battery to boot. But more than that it is suited to ‘heavy’ music – without doubt the best bass-centric portable I have ever tested.

Yet it is refined enough to sit proudly in a stereo pair in a lounge room or rugged enough to power a party – more so with its PARTYUP pairing feature with most other Ultimate Ears portable speakers.

In many ways it is a gamble for Ultimate Ears. Its speakers have traditionally been Coke-can sized, 360° sound, BT, IP rated speakers. They are excellent as portable and rough and tumble devices, and that is why over Ultimate Ears commands over 50% of this category sales.

This is a large device. It has

And to sound – EXCEED

Ultimate Ears claim a maximum SPL (sound pressure level) of 100dBC. In a BT setup, it reached 85dB, and we suspect that this is more a limit placed on smartphones so as not to damage your hearing.

Via AUX-in cable from a pre-amped signal is was able to reach 95dB, and we have no doubt you could push it a little further.

We played a variety of Uriah Heep bass-heavy music and the results – from a transportable speaker – were outstanding.

On some tracks, hints of bass started at 45Hz building strongly to 64Hz. It is essential to understand the sound signature (you can read more about that here)

This is a native ‘warm and sweet’ signature perfect for most music or movie genres.

But you can play with the app and quite substantially change the signature. Pre-sets include Bass Jump, Base Boost, Game/Cinema or Cramped spaces as well as the customisable 5-band equaliser to tweak the bass, mid and highs. Unlike so many ‘portable’ where the EQ is useless – this really works well as it downloads the EQ setting to the speaker.

It has a microphone to adjust the sound to different environments. You can really hear a difference when you move it to other locations.

We found that the best placement was 10cm out from a solid sound reflective wall (not drywall that tends to vibrate) to allow the rear passive radiators to belt out the bass.

You can corner place it but allow at least 30cm out from the corner.

When placed against sound-absorbent walls (curtains or soft furnishings) it tended to amp the bass more than expected losing its warm and sweet signature.

We also found that it was not as good in a ‘bookshelf’ as the mic tries to compensate for the native 270° sound stage.

We did not try a stereo pair, but in our experience placement about two to three metres apart would give a decent soundscape/stage out to about five metres.

We were able to test the battery. At 50% volume (65-70dB) it will go 24-hours. At maximum volume on BT, it lasts a little over 8-hours. We suspect somewhere in between will see it at 15 hours, and that is heaps.

Some reviews have criticised this for not having USB-C charging, but frankly, the current it needs to charge a 12800mAh battery and drive stereo Class-D amps does not exist in the USB world.

Claimed maximum distance from the music source to the speaker is 45 metres. Using a Samsung Galaxy S20 Ultra 5G with BT 5.0 it reliably reached 40 metres. Remember that BT uses a standard SBC codec and this and the sound performance was exceptional.

BT will remember up to eight devices, and it has two BT switchable inputs.

As a beauty, I would definitely consider this for general music listening – with the caveat that BT is SBC – MP3 radio quality sound. For better sound use the AUX-IN or Optical inputs. A pair (in stereo) would be refined enough for lounge room use.

As a beast, there is little to compete with these for transportability, volume, music quality and battery life. Sure, Sony and JBL have large party speakers with fancy lights, but they are for different use.

Sony has a battery-powered (7 hours) Party animal stereo speaker that is great to 80dB but not as much bass as HYPERBOOM (if that is what you want).

No, this is unique, and it gets the tick. Ultimate Ears must be congratulated for pulling off a bold move from 360° speakers.

Features
Value for money
Performance
Ease of Use
Design
Reader Rating0 Votes
Stereo with environment compensation
Very well made and durable
Excellent and customisable sound signature
Minimal unpleasant THD at 100%
Longest battery life in the transportable category
Multiple inputs - BT X 2, AUX-IN and Optical
None really if you understand the limits of a transportable BT speaker
4.7