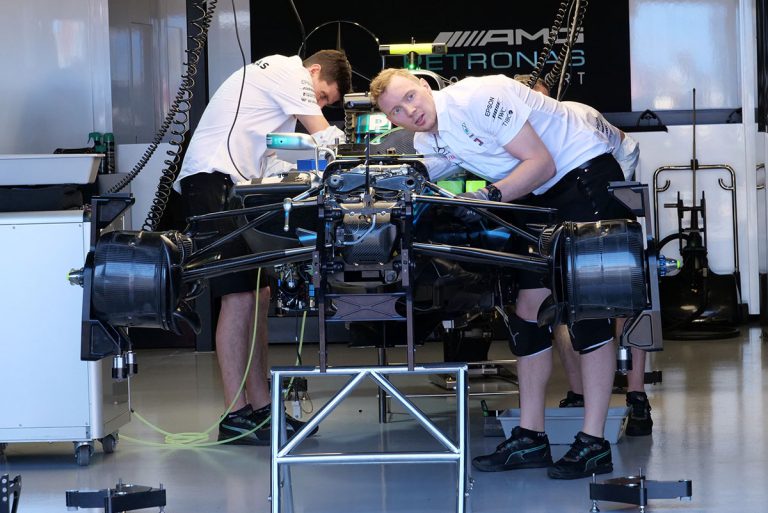 Every year in March a couple of dozen of the world’s F1 ultimate gadgets spin around a track in Melbourne. The aim of course, is to see which one’s the fastest. What struck me most when I visited the garage of the leading team was … its cleanliness.

The event is the inaugural race of the 2018 FIA Formula One (F1) World Championship. I visited the team of the last year’s season winner, Mercedes AMG Petronas Motorsport. Its Mercedes powered cars are driven by current and four times World Champion Lewis Hamilton and up and comer, three times race winner Valtteri Bottas.

Due to rule changes this season we will know soon just how fast these new cars are. These 1.6 litre V6 hybrids produce around a thousand horsepower. On certain tracks they can propel the 733-kilogram car to well over 350 kilometres per hour.

But it’s a long way from just a man and his car these days. The Mercedes AMG Petronas Motorsport team is staffed by something like 1500 people. It has four or five pit garage and command centre interiors which it ships out to venues well in advance so that they can be bedded in before the race. The garage has a modest ten or so display screens, but when I snuck a peek in a couple of back offices, there were many engineers in front of their computers, peering at screens laden with graphs and data.

The team has about sixty staff trackside, but during the race week there are engineering teams for both car and engine assembled in two locations in Europe. They operate on Australian time for this period, and are in instant, permanent communication with the track-based team. All telemetry data goes instantly to them for analysis.

The total value of sponsorships for the Mercedes AMG Petronas Motorsport team is reputed to be in excess of $200 million. I visited the track as a guest of Epson, one of the major sponsors. Others include Qualcomm, the Malaysian oil company Petronas and, this year, Tommy Hilfiger. That clothing brand replaces Hugo Boss, a previous sponsor.

Which brings me to F1 cleanliness.

You have never seen such mechanics as you see in a Formula One garage. The Mercedes mechanics are smartly dressed in their Tommy Hilfiger work wear: black shorts and white shirts emblazoned with sponsor logos. I was there at 2pm, so they’d been at work for hours, yet there wasn’t a smudge of grease on any of those white shirts. Nor on their hands. Nor anywhere else.

Motor garages are notoriously full of black stuff. It isn’t so much the grease – which is usually a translucent yellow/white, but the dirt and metal filings and dust that accumulate in it. Of that there was nothing in the Mercedes garage. And clearly not on the exposed chassis of the race cars themselves.

I guess things could be cleaner if the garage were turned into a “clean room” facility. You know, with airlocks and an over-pressure interior, but apparently they don’t need to go quite that far.

So why, apart from pride, the extreme cleanliness? This is my supposition: it’s because of the technical rules. The team must use the same gearbox for each car across the whole season. Each car must get by with a maximum of three engines. There can be no parts changes within those engines.

How to make an engine last? Well, you can bias design towards robustness rather than performance, but that is probably not a good idea if you want to win races. No, you design with the tightest of tolerances to the highest level that you can achieve, and then you remove every possibility of failure that you can think of. And that includes things like dust making its way into moving parts, dark grease caking a critical component, causing it to overheat.

In other words, the cleanliness is part of the maintaining performance.

Come Sunday, we’ll see how well that works, along with the million other things that go into a win.

Meanwhile, here’s Lewis Hamilton nonchalantly piloting a “modestly priced” car at a ridiculous pace on a wet and oily track on Top Gear back in 2007.