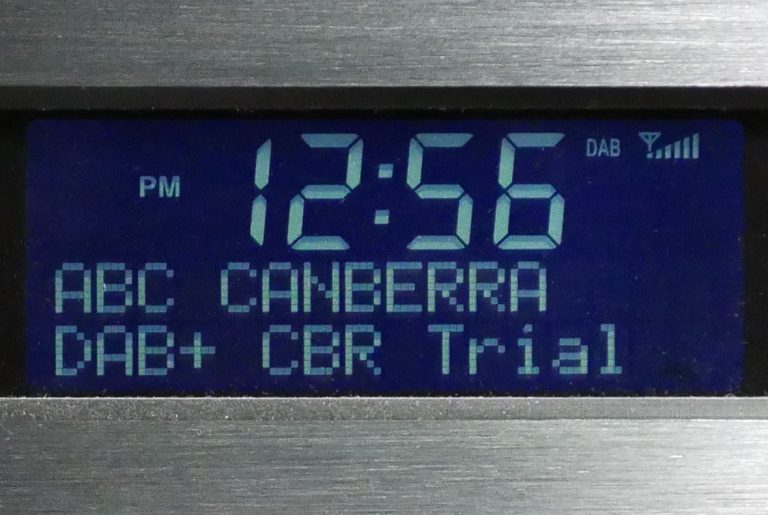 I must be feeling sour this morning because I’m not celebrating as I ought to be in view of the good news. At last my home town of Canberrra is getting permanent digital radio, so says the Australian Communications and Media Authority (ACMA). So is Darwin and so is Hobart.

Canberra and Darwin have actually been receiving DAB+ radio transmissions for a few years now on an ongoing, periodically renewed, “trial” and “testing” basis. With permanence, their transmissions ought to receive a power boost to something capable of being received throughout their respective areas. At the moment I can get DAB+, but only via a tall external antenna. And Hobart has thus far missed out completely.

But it has been such a long time coming. The eighth anniversary of the commencement of DAB+ in the five mainland State capitals was last month (except for Sydney, which was delayed by weather for several weeks).

There are great advantages in DAB+ over both AM and FM. Sound quality for one. And more efficient use of the radio spectrum. The capital cities use two channels of what used to be the analogue TV VHF radio space to send a couple of dozen separate programs. They can also carry text with program information, and even pictures.

But AM and FM aren’t going anywhere soon for several reasons.

First, Canberra, Darwin and Hobart don’t have their full DAB+ running yet.

The acting Chairman of ACMA, Richard Bean, says, that the “digital radio channel plans … make frequencies available to broadcasters wishing to provide ongoing digital radio services in Canberra, Darwin and Hobart. The ACMA will now commence discussions with the broadcasters about starting the transmitter licence allocation process.” “Commence discussions” eh? In other words, actual implementation is still some time off.

There’s more good news. ACMA says that the Federal Government has “asked the ACMA to facilitate the rollout of digital radio in regional areas where licensees make the commercial decision that they wish to offer the service”. Mr Bean says that “there are many regional radio broadcasters keen to offer digital radio services”.

So good news for rural Australians too, if still some indeterminate time off. At least the legal impediments to it are now being cleared.

But even when it hits the regions, do remember that DAB+ doesn’t have quite the reach of AM, so there’s still likely to be AM at least for the foreseeable future. The oldest, simplest radio technology will continue to have a long life.