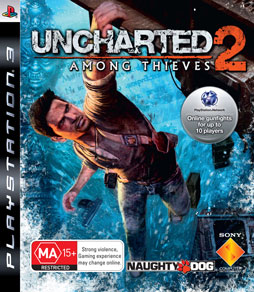 A follow-up to the amazing Drake’s Fortune game, ‘Uncharted 2: Among Thieves’ puts you in the shoes of a daring tomb raider and catapults you into a fantastic adventure with a great supporting cast, and a host of really bad guys and some excellent monsters. There is a strong, but highly choreographed start to the game, where you’re funneled through a series of dramatic sequences to pump up the sense of drama, but this quickly gives out onto the more free-form adventure that made the first game such a joy. The story is good enough, with lots of twists and turns, to make us want to preserve the fun for you and not spoil it here, so let’s just say that in discovering the plot for yourself you’ll be treated to some brilliant voice acting and character movement along the way.

In fact, with the amazing acting and production values, Uncharted 2: Among Thieves’ is easily as entertaining as watching a good action movie; more so, of course, because you get a slice of the action yourself! Dialogue is a high point – the repartee between the main characters is credible as well as being entertaining; spoiled only by the glassy-eyed look in Chloe’s eerily robotic face, although that soon becomes the least of your troubles.

And, as with last time, Nate is not an infallible one-man army who communicates with sporadic macho grunts – indeed, he’s often the butt of everyone else’s taunts and jokes, accepting it all in good humour. There is consistently clever dialogue: at one point, we heard a muffled “hope you haven’t forgotten about me” plea from one of the main characters, still stuck in an elevator, to make sure we stayed focused, but we had forgotten about her! So the dialogue at once reminded us we should be searching for a way to get the power back on, but still fitted perfectly in context with the narrative, a quite superb touch. This standard is maintained throughout, with some great exchanges with ‘last year’s model’, Elena, especially that make you smile and even laugh out loud.

The visuals are truly splendid for the most part. Character modeling is superb, with great detail in the facial animation and the clothing. It’s not all just painted on: Nate has holster straps that stand off his shoulders, as separate, 3D models; pendants shift as their wearers move; Chloe’s hair swings in front of her eyes, and this all helps paint a very realistic picture. The environments, too, are a real star of the show in their own right and you’ll often find yourself just slowing down, even stopping and swinging the camera around you, to admire the view.

This is slightly let down by other visual elements that lack the same care and were clearly handed to more junior, or less skilled at least, members of the development team to take care of – an early, jarring example is the beer bottles the team wave around in an opening scene, their complete lack of detail completely incongruous with the loving attention spent everywhere else in the scene. But these instances are minor and the environments are so wonderfully executed that it’s exciting just to get to the next location to scout around.

The characters are so well portrayed, the acting is so good and the dialogue so convincing, that you actually do feel for them, you’re concerned about what happens to them throughout the game. This characterization is far more rounded than the average offering and will, we think, be a major talking point in videogames circles for some time, setting the bar far higher than most other games developers will ever achieve. Combat is engaging and fun, with a superb variety of weapons that changes according to the enemy type you’re facing, and while there’s a bit of ‘spawning’ (successive waves of bad guys suddenly appearing and rushing towards you) in this respect, a quick switch to one of the excellent online modes in the game is an instant cure.

There are a few genre conventions in the game – conveniently placed gas bottles scattered around areas of conflict, weapons and ammos just lying around (although often after a gunfight, dropped in place by downed enemies) and a quite linear progression, but these, and particularly the last, are understandably necessary for the game makers to build their story and maintain both the narrative arc and the sense of tension. And that tension can be palpable as Nate and his crew stumble into a clutch of bad guys and kick off a gunfight, or when an APC trundles menacingly across the street in front of your party or when you’re ‘running and gunning’ your way out of trouble in one of the more ‘set piece’ escape sequences.

Uncharted 2: Among Thieves is a beautifully crafted game that combines an entertaining adventure with tight action sequences, woven together with the best voice and motion acting you’ll see in a game this – or any other – year. Characters are distinct, credible and appealing, the pacing is perfect, the story interesting with the ‘could it be true?’ intrigue of a Dan Brown novel and graphically, this is the best looking title yet to grace the PlayStation 3; all the more precious given that it’s an exclusive. Uncharted 2: Among Thieves is my pick for game of the year, regardless of the imminent start of the ‘silly season’.