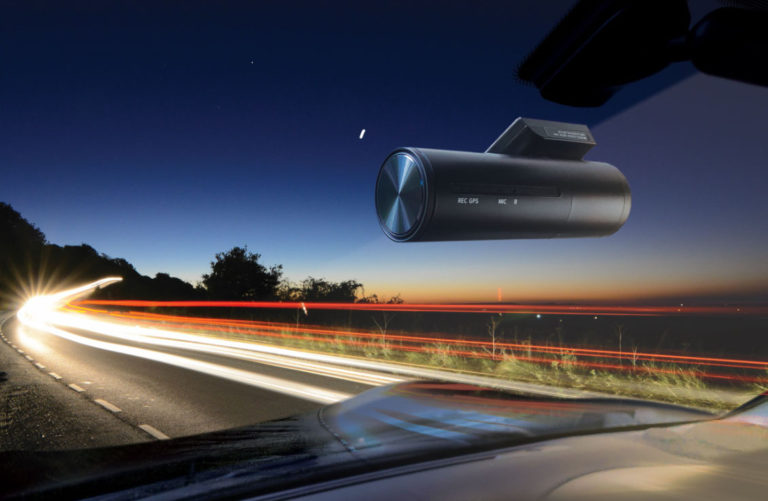 Keep your fingers crossed. Perhaps the borders will remain open this holiday season. If they are, you’ll probably like a little extra security on the road with the Uniden Dash View 30 dash cam.

The Uniden Dash View 30 dash cam does all the basic stuff that a dash cam is supposed to do, plus a little more. It attaches to the inside of your front windscreen and captures a wide view video of what’s going in front of and somewhat to the sides of the car as you noodle along down the street.

The angle is rather wide – 140 degrees – and the resolution can be up to “2.5K”, which means 2,560 by 1,440 pixels. Whenever the car is on, the camera is on, generally powered through the car cigarette lighter socket (is it still permissible to refer to the power outlet in a car by that term?)

The Uniden Dash View 30 records it all to a microSD card. A 32GB Uniden-branded “High Endurance” microSD card is provided in the box. As it fills, the oldest stuff is deleted. But it will also record “events” to a separate folder and these are kept regardless. An “event” is when you press the control button, or when the built-in G Sensor thinks that you might be in a crash and automatically switches to “event” mode.

Also built in: a microphone for recording sound inside the car cabin – you have to switch this on to make it work – and GPS. The Wi-Fi is dual band so you can use the Uniden Dash View app (Android or iOS) to change the camera’s settings or view the video.

The body of the camera is a cylinder, solidly built. It is held at one end by a collar with a shoe. That slips smoothly into mounting bracket. You attach the mounting bracket to your windscreen. It is secured with very strong 3M VHB double-sided tape. Two brackets are provided – they’re little plastic things – so you can use the camera in two cars or take it with you when you update your car. The whole thing is compact enough to hide behind the rear-view mirror on most cars.

Supplied with the camera is a power cable with a Micro-B USB plug on the camera end and a car power outlet plug on the other. The cable is three metres, which should be ample for running it discreetly to the lighter outlet.

But also supplied with the camera is an additional four metre cable. This allows you to hardwire the camera to your car’s electrical system so that it’s powered even when the car is switched off. This enables “parking mode”. When the G Sensor detects movement in the car, it starts recording for one minute. Another cable is for plugging the unit into your computer so you can view or copy its files.

A small socket on the end, next to the control button, card slot and power socket is for a 1080p rear camera. It does not look like this is available separately, but only as part of the Uniden Dash View 30R system. That seems to be identical to this one, except for the addition of that rear camera and an extra hundred dollars in cost.

No, I did not consider running the car into a wall to check that the collision detection system worked okay. I’m going to simply assume that works as advertised. Everything else seemed to.

The camera stamps important information on the video. Not only does the lets the camera record where it is, via GPS data — it stamps the coordinates, time and speed on the video unless you switch that stuff off in the app – it also knows where (fixed) speed and red-light cameras are and announces them as you’re approaching. In the settings you can set the warning distance to 100, 200 or 300 metres. I found the the voice anouncements a touch quiet,, but I soon learned to interpret them/

And from the same position in 1440p mode:

The Uniden Dash View 30 takes its video in three-minute chunks. If an “event” happens, the camera moves the currently recording file from the normal folder on the microSD card to an “Event” folder. That ensures that it will not be overwritten. The camera sports a supercapacitor which keeps it running long enough to close down the recording safely. It uses that also when you just switch off the car ignition. Uniden says:

With a larger range of operating temperatures than a traditional lithium-ion battery, the supercapacitor is ideal for users operating the Dash View 30 in areas with harsh Australian climate conditions.

You can download the videos to your smart phone using the app or pop the microSD card out and place it in a card reader. The former worked, but I really wanted to get the files onto my computer, so I used the latter. Uniden recommends you use the VLC video player to view the recordings. Compatibility was fine.

If you just want to have fun rather than have the unit record incidents, you can put it into time lapse mode with frame intervals of 0.2, 0.5 and 1 second.

he Uniden Dash View 30 uses a Sony Starvis Image Sensor. The idea is that the back illumination provides greater sensitivity. I thought the picture was clear enough, although certainly not of cinematic quality. The colour of the sky around Parliament house seemed kind of water-coloured and a lot of the detail was somewhat over sharpened. But the thing was clear enough for its main job of helping you sort out who might have been at fault in some incident.

Here’s the video for you to judge for yourself. This was at the 1080p60 setting. At times, it shows the importance of keeping your windscreen clean. By their nature, dash cams tend to have a fairly extreme depth of field. You can see this when the angle of the sun illuminates the windscreen.

The camera produced a lot of grain in night-time video, kind of to be expected. Again, clear enough. The three minute video is boring, so just skip around a little to get a sense of how it works.

It has a useful app and some nice extras, such as speed camera warnings. We reckon that it’s well built and seemingly robust. And I suppose that in a hot car interior, lithium ion batteries could well be a point of failure. The supercapacitor thing should eliminate that.

Stickiness – what IT tech we still use each day!