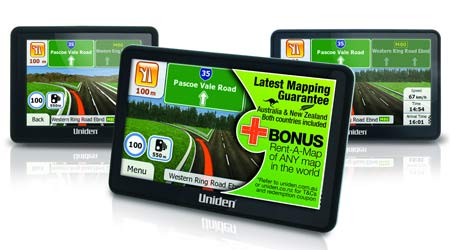 GPS units are computers, just like your smartphone. Think about how much smartphones have improved over the last two years. GPS is the same. If you’ve yet to buy a GPS or are still using one from several years ago, upgrading to the iGO 50 will be a revelation. Forget jerky maps and difficult directions, this is a clear and simple GPS… that only occasionally gets a bit too clever for its own good.

The iGO 50 is a 5 inch unit that comes pre-loaded with 2010-edition Sensis Australian road maps, so it’s pretty accurate across the country. Basic functionality is as you’d expect, though there’s a focus in the interface on “planning a route” rather than just navigating to an address – but it does mean you can start a route somewhere other than your current GPS position.

Once you’ve settled on a destination, the iGO 50 offers a bunch of information on the trip, including its estimation of how many litres of petrol you’re likely to use, and how many kilos of CO2 you’re likely to emit. This is of course based on the “average” car – results from a V12 Ferrari will of course differ.

The unit will also rate your chosen route on a “green” scale. If you’re not happy with the amount of environmental damage you’re wreaking, pick an alternate route – the iGO 50 offers half a dozen or more depending on your destination.

Other handy features go toward improving the navigation experience on highways where speed combined with confusing slip lanes and signage can often see you miss a turn. The map will disappear, replaced with a “junction view” schematic of the turn you’re approaching. The iGO 50 will also display highway signs, highlighting the sign you need to follow.

There’s also a “lane guidance” icon which highlights the lane you should travel it to prepare for your next merge.

Travelling overseas? You can rent foreign maps on a by-month basis, instead of having to fork out hundreds for a map you may never use again.

This is a fast GPS with quick satellite lock, and a slick interface. It calculates routes quickly, and even estimates your speed when you go into a tunnel and lose satellite lock.

That said, there are times when there is SO MUCH going on, on the screen (highway signs, speed limit, lane guidance, then junction view, then back to lane guidance) that it can get confusing and, worse, distracting.

Basically, the iGO 50 has a learning curve. Once you’re over it though, the wealth of information on the display really improves navigation.

The display itself is a little disappointing in direct sunlight – it’s hard to see clearly. The same problem exists with many of its competitors, but double-DIN installed units still have the edge here.

Slim, fast, slick, that’s the iGO 50. It’s an excellent GPS combined with good software ideas which, once you figure out how to use them, make driving unfamiliar roads much easier.