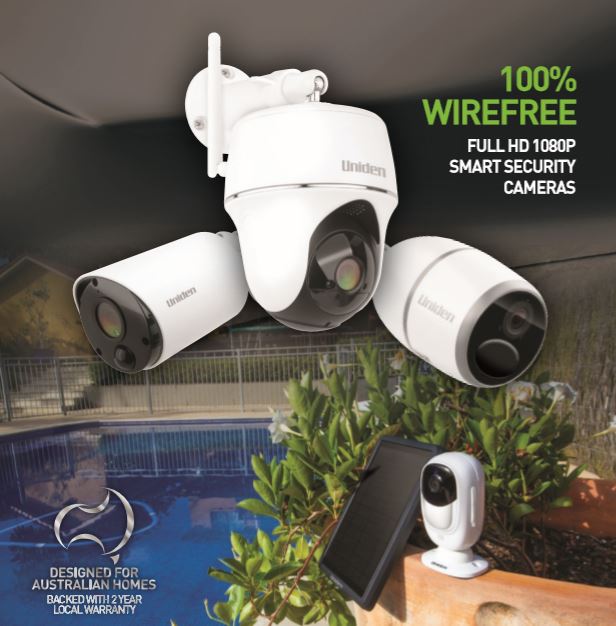 Uniden Solo security camera range is available from most major retailers – prices are from JB Hi-Fi.

Who is the Uniden Solo security camera range for?

The range is for the DIY market. We strongly suggest you read our Security Camera 101 to get a better feel for what Wi-Fi cameras can and can’t do!

The Solo+ comes with a flat magnetic ½ golf ball base that attaches to the magnetic camera base. That can act as a desktop mount or screw to a beam. Note the device only mounts vertically. It also comes with a 360° screw mount that can also use a ‘tree’ strap. If you mount it upside down, you can flip the image in the app.

The Solo PT has a standard ¼” base screw hole. This device must be mounted upside down to ensure IP65 weather resistance. It has a plastic mount and a metal 360° mount. You need to screw this to a wall, beam or pole. You can remote pan and tilt this at 355° (rotation) and 140° (tilt).

The Solo Bullet and 4G (not reviewed) has the same 360° mount and tree strap as the Solo+.

Each device has a MicroSD slot for local storage. We recommend at least 32GB and preferably 64GB. Recordings overwrite the oldest content first. Live view images can also store on your phone.

Uniden recommends the smartphone app have at least 4Mbps for 1080p live stream, 2 Mbps for 720 live stream and 0.8Mbps for fluent stream.

At last, an app that does not require you to set up an account – unless you want to access the cloud recordings so I guess you will.

Uniden uses mostly the same camera hardware and rebadged app as Reolink that rated well in GadgetGuy reviews in 2018 and 2019.

You download the Uniden Solo app, add the device, scan a barcode on the device and your smartphone, give it Wi-Fi credentials, and that is it. Simple.

The App is reasonably comprehensive and allows you to select ‘Fluent ‘or force 1080p. Fluent delivers the best rate it can over the Wi-Fi connection.

Uniden is making a big thing of solar panels and I agree – changing batteries is for the birds.

In our 45-day Solar panel test, we state that a solar panel with less than 5W will, at best slow the rate of discharge. We won’t be rerunning the trial for a while, but we expect that the little more wattage from  SPS-10 will extend the time between recharges. In our tests, it topped up a battery each day from 75% and seems a little more efficient on cloudy days.

The Solo+ has a removable battery that you can charge elsewhere so you can leave the camera where it is.

The PT and Bullet require you to take it to a charger (if not using solar).

We have included images from a 2K camera for comparison. As I said, it depends on your needs for detail and if you need colour night vision.

The Solo+ has adequate day vision, but you can see the difference a Star Vision sensor makes on the PT.

These shots are all taken at the same time brackets.

1080p is perfectly fine for most uses if you have the camera within a few metres of the subject. And Star Vision is impressive, albeit in mono.

As far as battery-operated security camera’s go these are fit for purpose. The app is adequate although the lack of definable motion zones can be an issue if you can’t place the camera properly.