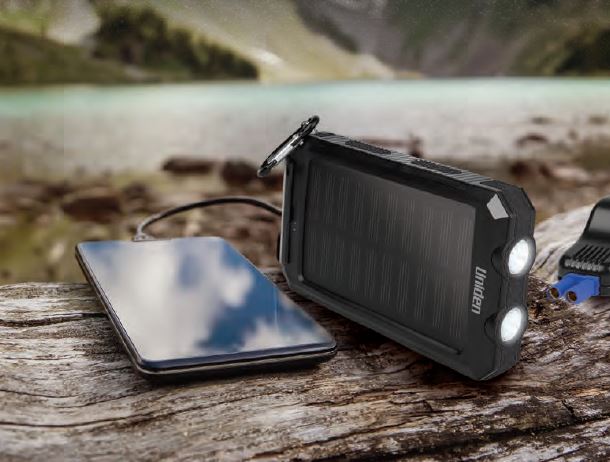 The Uniden UPP80S solar power bank is a geek gift. It is certainly one of the more useful power banks.

It is precisely what Tom Hank’s needed in Cast Away – mind you, mobile phones were not around so much in 2001.

Let’s go into use cases first – a solar power bank.

Well with 2.1A and 8000mAh you could connect it to a security camera – perhaps a better idea than just a solar panel recharger (shootout here) because the power bank stores excess energy for a rainy day.

Or you don’t want to run a USB cable from your GPS or Dash cam to an inconveniently positioned utility socket. Just leave this on the dash.

Every uni-student should have one too.

Every camper, hiker or fisherman could use this too – 8000mAh will top-up a flagship smartphone at least twice, and it charges itself as well. It has a carabiner clip to go on the backpack.

It may be good to have around for blackouts to keep a phone or another USB device going.

We exhausted the battery (two Galaxy Note9 charges to be precise). Mind you at 5V/2.1A a Galaxy recharge took about 7 hours.

We set it up on an east/west facing table which received sunlight for most of the day (say 7 AM to 7 PM – 12 hours. We were a little alarmed at first when it only had under 50% charge by the end of day one!

We estimate that the solar panel produces about 5V/.3A (1.5W)

We then read the manual

Charging via solar panel is an alternative method of USB charging. The solar charging time depends on the intensity of the sunlight, which varies at times. We recommend the USB charging as the primary source of charging.

It’s a 2 LED torch producing about 500 lumens. The beam is broad rather than focused. The compass is a little small for navigation.

If you realise that the solar panel is for top up of the 8000mAh power bank and you are probably paying about a $10 premium over a standard power bank, then it’s a great device.

If you expect miracles, then I suspect that such a device would a) be too big to cart around and b) technology is not far enough advanced to invent it yet.

Check out our review of the Choetech 24W portable solar panel – it is nearly perfect, and this battery would be a great accompaniment.