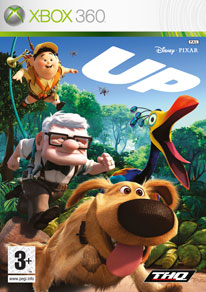 Russell and Carl, erstwhile explorers thrown together in an unexpected adventure in the Amazonian Tepuis, are the subject, of course, of both Pixar’s acclaimed animated film ‘UP’ and this game, which we played on Xbox 360. Clearly intended to be played co-operatively with two players in the same home, the abilities of each character mechanically complement the other – the old guy Carl can use his walker to latch onto ledges and pull himself up, for instance or push large boulders (there’s strength in the old boy yet!), while Russell hops higher and lowers a rope to haul Carl up. This marks UP out as the kind of game that parents might be interested in picking up to play with their kids. Hold that thought.

Made by the same studios that created the Wall-E and Ratatouille games for Disney, UP looks as good as the movie, with a clean, crisp look and charming characterization that will delight the kids (and serve as a taster for the film which, for some bizarre reason has yet to be released in Australia). The voice acting is a real standout, composed of clips from the theatrical release as well as fresh content recorded specifically for the game.

But the strong production values can’t rescue a game that is rife with small, but incredibly frustrating bugs. Given that UP is essentially built to be played with two players working co-operatively, it’s astonishing how often you can get in each other’s way, knocking one another off their feet (and, since you have a shared health bar, doing damage to the both of you in the process) or, even more irritating, how the computer-controlled characters, like the dog, can obstruct your path, often at critical moments. Dreadfully erratic target selection adds a very unwelcome extra challenge, often choosing to place the crosshairs on an object right across the other side of the screen after you’ve carefully lined up the object, and what you want to hit with it, right in front of you.

Multiplayer is limited to three biplane-themed games and doesn’t add huge value to the package, but it’s a nice distraction from the main game and actually considerably more enjoyable for a 10-minute blast.

So while UP looks really great, much like the Pixar movies they mimic, the game play soon becomes painful. Like many games that are based on cartoon properties, UP has a severe identity crisis. While the art design department essentially succeeds in capturing the look of the film, the game design department fails to capture the spirit, making what should be a simplistic and enjoyable game dull, repetitive and frustrating.

A title like UP should be accessible to younger players and present a scalable, progressive challenge to older fans. UP fails to stride this divide and, instead, its metaphorical balloons all pop and it plunges gracelessly down the abyss between the two; too hard for the littlies to play and too dumbed-down to appeal to adults.