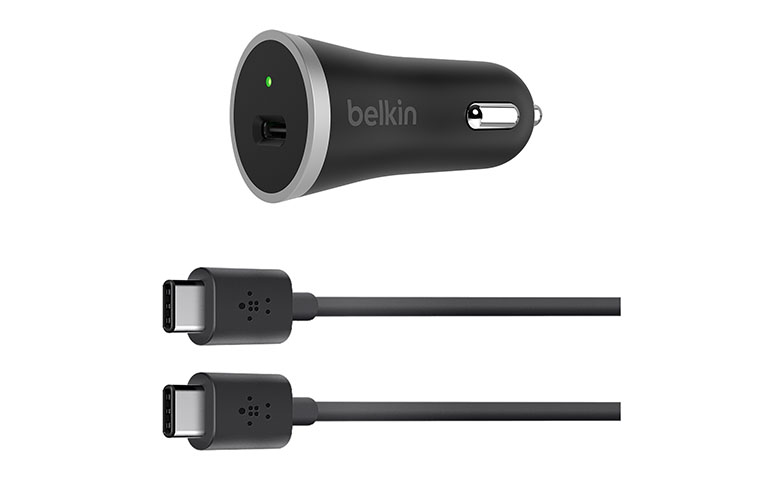 Now that Samsung has taken the plunge and moved to USB Type-C sockets on its phones, third party suppliers of phone power gear are stepping up. Not the least of them is Belkin.

It’s not just the Samsung Galaxy S8 line that is USB-C, so also are Huawei’s premium phones such as the Mate 9 and P10/P10 Plus, Motorola’s premium models, and Sony’s premium Xperia models. Apple’s likely to go that way and I’m guessing that within a couple of years, even low cost Android phones will switch over. Thank goodness.

We’ve already covered some Belkin USB Type-C accessories, such as the USB Type-C Ethernet adaptor and a bunch of its cables. And also its nifty Wireless Charging Pad. But now it’s showing off some new USB Type-C offerings. For example, there are two options for in-car use.

There’s a dual outlet 15 watt USB car charger and a single outlet USB car charger. The dual model has the four foot long (1.2 metre) USB Type-C cable fixed, and that can be used for fast charging, while there’s also a USB Type-A socket (which can provide up to one amp or 5 watts) in case you have an iPhone or something that also needs charging. Just right for his and hers.

The other just has the single USB Type-C socket. It comes with a 1.2 metre cable with USB Type-C plugs on both ends. Again, it can deliver up to fifteen watts. Both have a LED so you know they’re connected to your car’s power, and both have a “Connected Equipment Warranty” of up to $2500 to give you assurance that they’re not likely to set your phone on fire or anything.

There’s also a USB Type-C wall socket charger, also with up to 15 watts (three amps) output. This has a USB Type-C socket and comes with a 5 foot (1.5 metre) USB Type-C cable and the same connected equipment warranty. It costs $59.95.

All of these are fixed five volt output devices. They don’t offer the higher voltages supported by some proprietary quick charge systems but simply rely on having plenty of current on tap so that the device being charged won’t be limited by the power the charger can supply.

Finally, Belkin has a USB Type C version out of its “Mixit Power RockStar”. This is a power pack for recharging phones and tablets. It has two USB Type-A sockets, and comes with a short USB Type-C adaptor cable, and a short Lightning adaptor cable. It can charge using both at once, with up to 3.4 amps (17 watts) available from the pair combined.

It has a 6600mAh capacity, has the same connected equipment warranty, and is additionally Apple MFi (Made for iThing) certified. It costs $89.95.

You can of course use any of those devices to charge anything that can be charged with five volts. For example, just use your normal USB Type-A to Micro-B USB cable to charge up an older Android phone, or for that matter a set of Bluetooth headphones or other accessory.