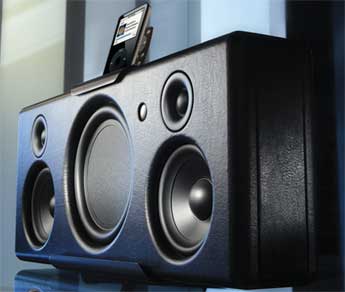 One of the weirder effects of the way that Apple’s iPod has dominated the portable music player business is the way this has swung a host of other manufacturers into making peripheral devices for it. One of the more popular devices is the iPod speaker/dock.

The concept is simple. Built into a set of powered stereo loudspeakers is a cradle for an iPod, with the appropriate connector. You rest the iPod in the cradle and its music is read by the system and delivered out into your room, freeing you from earbuds and headphones.

That is precisely what the Australian-designed VAF Octavio 1i does, but with considerably more authority than competing devices.

The Octavio 1i is somewhat larger than most such devices, but is still only 116 mm deep. It is also rather heavy, which comes from the solid construction and the weighty loudspeaker drivers with which it is equipped.
These are what allow it to produce full range high fidelity sound at room-filling volumes.

The iPod sits in a cradle atop the unit. Next to it is a single knob that controls volume, switches between the iPod and the two auxiliary inputs (useful for, say, a CD player) and powers the unit on and off. There is also a credit-card style remote control. A composite video output can deliver video iPod’s movie content to TV, but not the iPod’s own menus.

Three coloured cloth socks are included to fit the unit to different decors, if desired.

All that’s well and good, but how did it sound? Well, let me start with a comparison. The best sound from a small package I have ever heard came from the Meridian F80 DVD/CD player, reviewed on GadgetGuy a few months ago. Until, that is, I reviewed the VAF Octavio 1i. Now the Meridian costs over $4,000. This unit costs less than 20 percent of that. VAF has mastered the art of producing great sound from a small package.

This little unit managed to fill my listening room with sound. It didn’t sound anything like an iPod speaker dock. In fact, in all ways but one, it sounded like a high competent stereo system, based around a quality stereo amplifier and large, well-designed bookshelf speakers.

The bass was solid and powerful. The fundamental frequencies of the lower pedals of a pipe organ were missing, but everything else was there, including the kick drum of rock bands. The whole drum kit, in fact, stood out with most works, yet more restrained music was treated with reasonable delicacy and excellent clarity.

The only real limitation on performance was the width of the stereo image. Because the speakers are so close together, no broad soundstage is developed.

The remote control worked from a decent range and both it and the single control knob were easy to use and quite intuitive.

If you have a shelf that’s, say, 130 mm deep, and you own an iPod chock-a-block with music, then the VAF Octavio 1i is easily the best way to unleash the iPod’s contents into your room. There are cheaper docks, and smaller ones, but none so good as this one.

Overall
Features
Value for money
Performance
Ease of Use
Reader Rating0 Votes
Powerful and full-range sound, easy to place, seems too small to produce the bass it delivers.
Video output is only for iPod video, not for menuser.
4.4