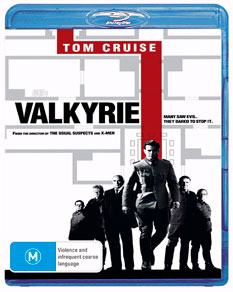 A moving and quite powerful thriller based on the true story of senior German – but decidedly not Nazi – army officers planning the assassination of Adolf Hitler, Valkyrie has you willing the plot to succeed despite your knowledge of their inevitable failure.

With steady pacing that builds into a tense and dramatic finale, the appeal in Valkyrie lies in watching the denouement of this extraordinary attempt by a few good men to rid Europe of the greatest evil it’s ever known, regardless of whether they lose the actual war. There’s some sensitive and understated acting from the likes of Bill Nighy and Kenneth Brannagh, culminating in high drama as their scheme unravels, their bravery is met by the gutless ignorance of weaker soldiers, and all is lost. Valkyrie is as worthy of your time as Schindler’s List, belatedly demonstrating to audiences perhaps tiring of World War II sagas that there were brave Germans too, who resisted Hitler and paid dearly for so doing.

The Blu-ray edition of Valkyrie includes several segments not on the DVD. Of these, ’92nd Street Y: Reel Pieces with Tom Cruise and Bryan Singer’ is interesting, in spite of a gushing series of questions from Annette Insdorf, Director of Undergraduate Film Studies at Columbia University, who is either Tom Cruise’s biggest fan or simply terminally starstruck.

Better is the BD-only segment ‘The Road to Resistance: A Visual Guide’ presented by Stauffenberg’s own grandson Philipp von Schulthess, which includes an eye-witness account, some moving imagery of actual locations frequented by the conspirators and several stark reminders of how vile Hitler’s regime was.

Best, though, at least for any wartime aviation fan, is ‘Taking to the Air’, which details the use of the genuine, vintage aircraft featuring in the movie. Seeing the real thing in flight – indeed the very fact Singer went with the real thing, rather than CGI – is a real treat, particularly for fans of the Meschersmitt 109, Curtis P40 or the venerable old Junkers transports.

Significantly, the Blu-ray version also ships with a second disc that is a ‘digital copy’; a second copy of the film that you can transfer to a portable player via your home computer.