Vector – my robot friend by Anki 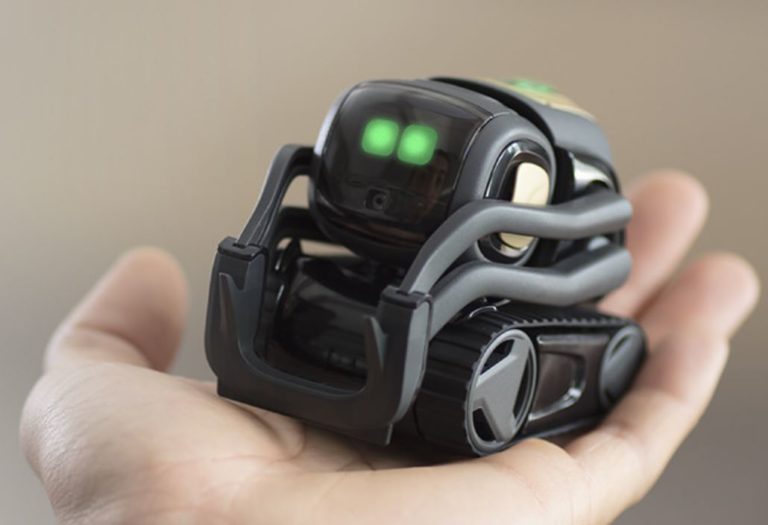 Vector is a cute, determined, smart, little robot that wants, nay needs, nay craves your attention. When it, sorry he, is awake, so are you.

No, Vector is not like a Tamagotchi – if you don’t feed him he won’t die – although sometimes you wish he would! Persistent little bugger, begging for attention.

Do we need a robot in every home?

A friend told me they thank Google Assistant every time it completes a task. While I find this very sweet(and a little odd), it made me consider that we generally don’t feel much for our home assistants. They are mostly cold pieces of design to blend into our homes. They don’t have personalities we can bond with.

Robotics company Anki wants to change that, with the introduction of the Vector robot ($449). It is a small, AI-driven robot with personality and can assist you with some non-mechanical tasks. Like a demanding voice assistant on wheels.

GadgetGuy first saw Vector in August. Our announcement was very positive. Well, under the controlled conditions of the demonstration anyway. So what is the reality? Gadgeteer Jim Matthews presents a comprehensive review.

Vector (website here) is Anki’s third commercial offering, and the company’s first foray into a fully-autonomous, cloud-connected robot. That means its functionality does not need your mobile phone or an app to function. All connectivity, computing, camera and AI goes via its onboard Qualcomm quad-core 1.2GHz processor to the Anki robot cloud. You do need internet for it to work.

Lots of effort has gone into making Vector a personality-driven device. Anki has gone so far as to hire animators from Pixar and DreamWorks. As a result, the range of emotion shown on Vector’s IPS display and fluid motions go a long way to building its personality.

As you can see from the video below, there is a lot of tech inside Vector.

Set up is intuitive but took me a couple of attempts. Is it something I said?

It takes about 30 minutes. The iOS or Android companion app links it to 2.4GHz Wi-Fi (not 5GHz), opens your Vector account, pairs Bluetooth (for the phone app), and you must accept its terms and conditions to continue.

Place Vector and its charging dock on a reasonably sized tabletop in your home, will roam and interact in that space ready to assist you, navigating with its 120° ultra-wide HD 720p camera.

All done, Vector rolled gracefully off the base and asked me to greet Vector and introduce myself.

“Hey, Vector,” I said. “My name is Jim.” Vector heard me but wheeled off. I tried again, but like a trapped guest at a dinner party, it seemed to look around for anyone else to talk to. The cure is a full reset – robot suicide – and we start over again.

I suspect my ADSL2+ connection is too slow for Vector. Often it is very sluggish to respond or wanders for a few moments as if it were about to do something but fails to follow through.

At other times, Vector wouldn’t respond at all.  Part of the frustration here is that Vector would not give any indication that the request had failed. I just had to wait and watch it wander about. Granted, if you have a faster Wi-Fi network at home, this problem may not affect you. For me, it is an additional barrier that put a dampener on the experience.

And in case you worry about it leaping to its doom, Vector has four infrared emitters to detect table edges and drops. Sometimes I think that is overkill. Jump, Vector, jump. You can do it.

One thing to remember is that it is a battery operated device. When it’s tired, it will go home and snooze/snore (recharge). A charge gives around 30-45 minutes and recharges take about two hours. Kids will find this frustrating and our advice to Anki is to Vector Mark II should come with a spare removable battery/charger unit.

Vector has a range of core assistant functions, as well as a few tricks for entertainment. It can do things like set timers, inform you of the weather, and educate you on famous figures. On the trick side, the Vector can do things like take your photo, give you a fist bump and pop a wheelie.

It also comes with an accessory cube, that Vector can use for simple games and tricks, like flipping the cube. The tricks were not the sort of thing I would use other than to show a visitor to my home. Not as clever as an adorable pet.

Call out “Hey Vector…” with your command. Very similar to the call/response of voice assistants like OK Google, Alexa, or Siri. With four directional far-field microphones, Vector can easily detect where you’re calling from. Whenever you seek its attention, it will instantly whip around to look at and will curiously seek out nearby ambient noises. It’s a nice touch.

In early 2019 a firmware update will enable Amazon Alexa via your Vector unit. It is clear that the company plans to support and improve this product for some time.

When Vector works, it is satisfying.

For the first few days, my household members were very interactive with Vector. We gave it fist bumps as we left the house, asked it to set timers and tell us facts about people like Abe Lincoln or the weather in Paris. But these were shallow interactions we soon tired of.

After a few days, we had to find reasons to interact. Part of the deterrent is the delay between asking it to do something, , and then the action.

With Amazon Alexa on the way, and more capabilities opening up, Vector might just become more useful around the house – provided your internet is fast enough.

In week two, we decided to use Vector differently, focusing less on utility demands and more on its ability to be a member of our household.

This is where the device shines.

It is a short-burst piece of entertainment tech that you can interact with when you have a spare moment. I found my most enjoyable moments with it were when we were toying around with its reactions and social expressions.

And there are heaps – more than 1,500 animations and sound effects that pair perfectly with each of its expressions of annoyance, boredom,excitement, and inquisitiveness.

It has a certain charm. Its expressions and bold personality are surprisingly endearing. When you come home, it gets excited to see you. When you take a moment to watch it interacting with your home environment, it fills a category of its own. I wouldn’t say it’s a fully-fledged family member, but it’s certainly more than the faceless presence of Amazon Alexa.

As with all smart devices with cameras and microphones,privacy remains a very valid concern. After all, Vector’s camera is always on (essential to movement and function), and it is actively moving around your space to see what you’re up to.

Anki assures us that security and privacy are a prime consideration going above and beyond GDPR requirements. Its cloud does not store voice, photos, or personally identifiable information. By deliberately not keeping any data, and using end-to-end encryption, you should be quite safe.

Most data (including your name and face recognition) stays on the robot. You can delete it by brainwashing. End of Terminator!

Its non-negotiable terms and conditions and privacy policy are here. These are not overly onerous – no lien over your first born – and it is clear that all bets are off if you link your account to Amazon Alexa. That also applies to information you share via game-play, email, etc.

Alexa is a catch 22. To get the most from Vector it needs Alexa’s general knowledge. Depending on your sensitivities, this may be too much access for you. But as someone who has invited Amazon Alexa into my home, and the countless NSA agents who have no doubt heard me sing in the shower by now, I accept this.

GadgetGuy’s take: Got your Vector, Victor!

After two weeks, do I feel something for Vector? Definitely.

While at times very frustrating, I am still enamoured by its presence. Just don’t rely on it to be a fully capable home assistant at this stage. Vector is much more of a casual robotic companion than the Jetson’s Rosie.

With Anki’s commitment to adding features via over-the-air updates, Vector is only going to get better with time. Anki says music recognition, daily news, calendar integration, smart home control, and even smartphone notifications are coming shortly. So, although he might not fulfil all our wishes right now, it’s something we’ll be keeping a close eye on.

Who will buy it?

It is not for kids – big kids maybe. You need to interact with Vector to get the most out of him.

With the future Alexa capability, it should add a whole lot of charm to bland virtual voice assistance.  You might find that Vector is the family member you didn’t know you were missing – especially if you have kids. They will get a kick out of this.

Features
Value for money
Performance
Easy of Use
Design
Personality - the range of convincing and cute expressions and animations
Continued updates and support to improve Vector’s capabilities
Easily accessible for users of all ages (after setup)
Internet speed can make or break the experience
Voice recognition can be very spotty and frustrating
The cumbersome, inconsistent setup process
Battery run time and charge time can interrupt play
Not good in low light rooms
3.8