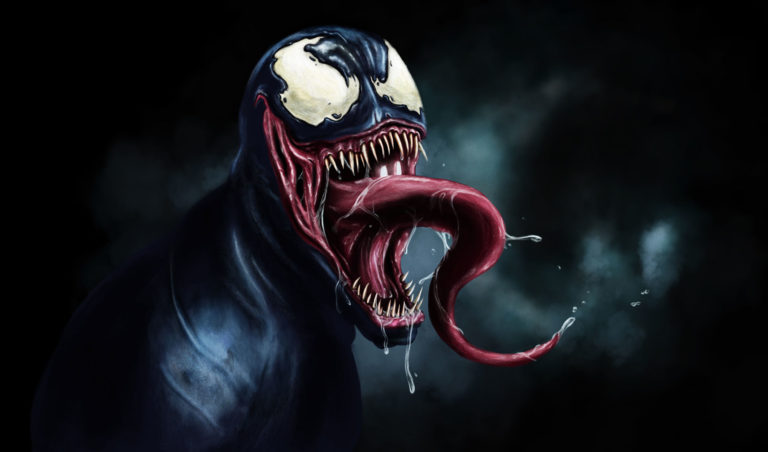 Sony Pictures and Universal will take over Kinokuniya Bookshop in the Sydney Galleries on Saturday 19 January to celebrate the home release of Venom – its latest addition to the Marvel Universe.

Venom (website here) is potentially earth’s nightmare. A spore from a comet infects journalist Eddie Brook (Tom Hardy) and threatens to devour and inhabit its hosts. If you are a fan of alien spore inhabits earth boy genre this is for you.

A pop-up shop will be devouring and inhabiting Kinokuniya Books in the centre of Sydney this Saturday, 19 January. It is offering Marvel fans bespoke Venom t-shirts designed by local artists Jesse Wright , Mulga  and Rob Sherwin.

Each artist has re-designed Tom Hardy’s villainous character Venom in their own unique style, providing three awesome designs to be screen printed onto t-shirts. Fans are encouraged to bring their own t-shirts to the pop-up where they will be able to choose from one of the three designs and have this printed directly onto their t-shirts.

Hailing from Inner West Sydney, Jesse Wright is an ex-advertiser who left the suit world to focus on his creativity and art. He has previously worked with Young Henry’s, MTV and the Foo Fighters, with his Venom-O’s artwork being his latest creation.

Known for his unique style of intricate line work and bright colours, Sydney-based artist Mulga has included the iconic Venom tongue while incorporating his own tropical touches often seen in his vibrant murals and designs. Mugla’s collaboration with the Venom pop-up follows his own successful pop-up store in Westfield Miranda.

Rob Sherwin describes himself as “an Australian illustrator drawing monsters on tiny piece of paper” so it will come as no surprise to his 15,000 Instagram followers that he was on board to recreate the ultimate anti-hero, Venom.

Located in the CBD at The Galeries, Kinokuniya Books has one of the largest selections of Marvel comics in Sydney complete with their very own Comic Counter. The pop-up is one day only with screen prints available from 1pm until 4pm.