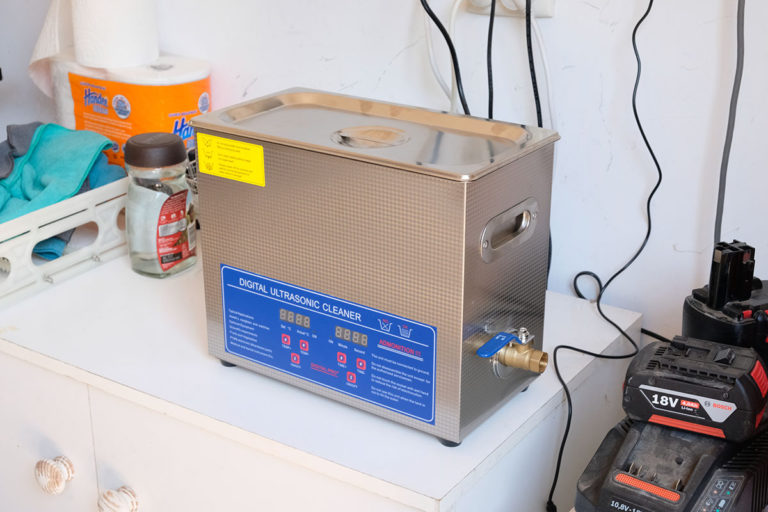 I hesitate with this review of the Vevor Ultrasonic Vinyl Record Cleaner. The reviews of products for cleaning vinyl records are almost all useless. So many of them are concerned about how clean the records look. But what they look like doesn’t really matter. Sure, a record that looks filthy will typically sound awful. But a record that looks clean? It may sound as good as new, or it also may sound awful. What matters is the sound.

Which brings me to the Vevor Ultrasonic Vinyl Record Cleaner. I spotted it online, priced at $369.99. I was so, so tempted. And then Black Friday rolled around, and it appeared before my eyes for just $299.99. My self-discipline crumbled, and I reached for my debit card…

What is ultrasonic cleaning

It sounds like a strange way of going about things, but ultrasonic cleaning has long been used for cleaning things where dirt gets into nooks and crannies, making it difficult to remove. Basically, the object to be cleaned is immersed in a bath of water – often with an additive that breaks the surface tension of the water, helping it get all the way in. Then a powerful ultrasonic signal is blasted into the water for some minutes. This leads to “cavitation” of the water near any surfaces. That is, tiny bubbles of gas are formed. As they form and then collapse, they loosen the dirt on the surface. If you take your jewellery to a jeweller for a clean, there’s a good chance that the pieces will end up in an ultrasonic cleaner.

Well, price really. Ultrasonic cleaners designed for vinyl records have been around for quite a while as an alternative to the more traditional record cleaning machines. Those traditional machines typically involve brushes and vacuums to suck fluid and dirt from the record surface.

I’ve reviewed a record cleaning machine and it works. And I’ve reviewed an ultrasonic record cleaner, and it also worked. That ultrasonic record cleaner was a real bargain amongst the breed, costing just $1,999. You see why my eyes lit up when I saw one for $299.99? But would it be any good? Only one way to find out. I paid my money, and a few days later the unit turned up in a nondescript cardboard box. Of course, it wasn’t identical to that other cleaner. The attachments for the records were clearly different, and the Vevor uses 180 watts at 40kHz rather than 200 watts at 35kHz. But conceptually it was the same.

Vevor sells a bunch of ultrasonic cleaners of various sizes for various purposes. The Vevor Ultrasonic Vinyl Record Cleaner consists of two parts. The cleaner itself is a six-litre tank of stainless steel construction, and with a metal lid. There are controls on the front for the timer – how long the ultrasound will be applied – and for the water heater. The $2K cleaner didn’t have a heater, and I wouldn’t recommend using it, lest your vinyl warp or be otherwise damaged. But it’s useful nonetheless because since the heater has a thermostat, it has a thermometer. And this displays the water temperature when the heater is not in use. Since the ultrasound can raise the water temperature, you can easily monitor it.

The other part is an attachment which holds and rotates the records. I was pretty shocked by its construction. It seems to be made with slabs of machined aluminium, as though it belongs with the $2K machine, not a $300 machine. This has a spindle with a locking screw on the end and a number of plastic spacer discs. These are slightly larger than the size of a record label. You can put up to six LPs on the spindle, each pair with an intervening spacer. This whole contraption clips neatly onto the edge of the tank. A separate wall wart provides power for the motor. The tank timer does not interact with the motor on this, so you just switch it on and off manually.

The tank has a proper power cable with an Australian fitting on the end – China and Australia share the same three pin plug. But the wall wart for the motor had a US-style two pin plug. I cheated as we did in the old days: I turned them using a pair of pliers so that they fit in an Australian power point, but it might be safer to spend ten dollars on a plug adaptor. They work with our 230 volts.

To clean, you fill the tank with distilled water – I picked it up for a dollar a litre at Big W – and add a little something to help break surface tension. I used around 50ml of 64% isopropyl alcohol. Then you load up the records, tighten them into place, hook the holder/motor over the edge of the tank and turn on the motor. The tank timer defaults to 5 minutes. I just tapped the up button for a while to the fifteen minutes I decided on and pressed the start button.

You can’t hear 40kHz of course, but the unit does produce an irritating buzzy noise, so you may want to go to a different room until it’s finished. At the end of that you can shake them off and dry with a microfibre cloth. Then it’s best to air them for a while so any remaining moisture can evaporate. A record rack is included to facilitate that.

It’s all really quite simple. But I should note that the space/label protector disks provided with the unit are too large for either 45rpm singles or 10-inch 78s. I’m planning on fabricating some of my own for those records.

If we’re talking about improving the sound, well, as with all record cleaners, the answer is “yes and no”. It can do nothing for damage to the grooves, but it certainly cleaned out dirt. If your records are already clean, there’ll probably be no change at all.

I’m only going to demonstrate one record, which shows a pretty extreme improvement. It’s a very old LP, so old it’s only ten inches. Apparently, it was released in 1954. It came with those 78s I wrote about a while back. It’s Two in Love by Nat “King” Cole.

As I said, I don’t care too much about what the record looks like. So let’s see what it sounded like. I recorded the whole thing to a computer using the Audio-Technica AT-LP120XBT-USB turntable, cleaned it with the Vevor Ultrasonic Vinyl Record Cleaner then recorded it again. Here’s what the first recording looked like:

Quite the difference, huh?

Let’s zoom in on the middle of side 2. Here’s an 11.44 second segment from before the clean:

But let’s not rely solely on pictures. Here’s what the pre-clean segment sounds like:

Not perfect for sure, but enormously improved. I would have expected there to be lots of scratches, since this is how the record looked after cleaning, with lots of scuff marks:

I guess two thirds of a century of indifferent care will do that to a record.

A digression – what does dirt look like? Digitally, I mean.

Warning. This is super nerd stuff. It’s the kind of thing that fascinates me, but casual readers will find utterly boring.

One of the records I cleaned was Point of Know Return by the progressive rock group Kansas. I’d picked this up for around $10 second-hand from a real record shop and it was quite listenable as it was, although there were clearly a multitude of low-level clicks. Why not give it a bath? As with the Nat “King” Cole, I did this one in the distilled water plus a touch of alcohol bath, once only, no physical scrubbing. I guess you’d say this one is a pretty positive test of whether ultrasonic cleaning works.

So, let’s look at the full-track waveform of “Lightning’s Hand”, the first track on side 2 before we cleaned it:

It looks pretty clean. Looking at the left (top) channel only, there seem to be only three clicks that poke above the main level of the audio. So, how about post clean? Well, here it is:

Well, all three of those large clicks have gone … but what’s that spike poking up in the left (upper) channel at the middle of the screen. It doesn’t match any of the clicks in the original. Had the Vevor Ultrasonic Vinyl Record Cleaner somehow added a click?

Here’s one of the clicks in the uncleaned version:

That is quite typical of foreign matter in the groove. If you look at the waveform leading up to it and beyond it, you’ll see the left and right channels roughly match each other. Not perfectly – we’re talking about stereo music, after all.  And then in the middle of that is this massive spike which is roughly opposite in the left and right channels. That, dear reader, is something in the groove.

Now, when I played that track after I’d cleaned it – repeatedly over the section with that spike of apparent dirt, apparently deposited by the purported record cleaner – I heard … nothing. There was not tick or clunk or anything. What was going on. Let’s zoom in what looks like a click on the cleaned record:

Well, that looks kind of different. That spike looks like it’s part of the signal. It’s a flattened on the top – that’s due to the analogue to digital converter in the Audio-Technica turntable clipping with some high level signals, as previously reported. There is a noise tick there as well, but it’s quite low in level and immediately after that spike. Why didn’t that real-signal spike appear in the pre-cleaned recording? Fluke, I guess. It was just how the samples lined up differently on the two plays.