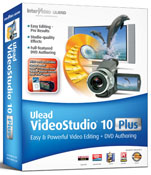 Frank McLeod first came across Ulead?s VideoStudio with Version 6. He says he found it easy to use, and like most people with their first ?fair dinkum? editing package, became somewhat biased towards it. So how does he find the latest version 10?

I started my video editing life with Ulead?s VideoStudio version 6, stayed with the program through versions 7, 8 and then 9 and then later, was introduced to its bigger sibling Media Studio Pro 8. Probably because I found the transition to Media Studio harder than I expected, I still retain(ed) an affection for Video Studio (a bit like a ?first love? if you get my drift) but really had not used it much recently. However, when the new version, VideoStudio 10 Plus (VS10), appeared on the scene, I jumped at the chance to have a closer look at it. It was certainly worth the effort.

Ulead VideoStudio 10 Plus has a lot to offer, now having progressed past the bare entry-level software and extended its appeal to those of medium-level experience. This has been achieved by increasing its capability and adding in new features previously only available, at least from the Ulead stable, in Media Studio Pro.

VS10 comes as a two CD set, one being the program disc and the other called a ?bonus disc?. Within the box – oh joy, oh bliss – there is a printed manual that is adequate in content and index, but is rather difficult to read due to the small size of the pages and the tiny font used.

Installation is straightforward and once the serial number is inserted, you are up and away. After installing the program proper, the bonus disc is also well worth installing as it contains WinDVD 7 (a DVD player software) Cool 3D 3.0 SE (for 3D titling) and Pocket DV Show MCE version (for capturing video and burning to DVD using the remote control on a Media Center machine). Additionally, there are sample video, audio and image clips that can be used in VS10 projects.

The second takes you directly to the editing section where there is greater autonomy and flexibility, and finally, you can choose the third option which invokes the assistance of the DV-to-DVD wizard , the role of which is self-explanatory. Do not discount or dismiss these wizards as they do make life easy for a beginner.

In the Movie Wizard section, there is the option for choosing between ?Home Movie? or ?Slide Show?. In the home movie setting, function choices include capturing video, inserting video and images, importing from a DVD and also from a mobile device such as a phone. In slide show mode, automatic pan and zoom is applied to all the still images on the wizard?s ?timeline?, and a limited number of transitions can be chosen. Music can be imported to loop behind the menu but the menu images cannot be changed. This is a most impressive section and a major benefit for those who don?t wish to dirty their hands with the nuts and bolts of editing.

If you are going to go with the more flexible approach to editing and use the Video Editor as opposed to one of the wizards, you really have to spend some time going through File/Project Properties and File/Preferences where a lot of the appearance and performance characteristics of the entire program are determined. In Project Settings, the type of DV file captured and used during editing on the timeline is selected. Here, it is usual practice to set the project settings to the same as the video to be captured as this enables SmartRender, a process that avoids time consuming re-rendering of previously rendered footage. Unfortunately, this is not clearly explained in the user?s manual.

The Video Editor interface is quite user friendly and not too busy, being either self-explanatory or explained by ballooned tips on hovering the cursor over an item in question. I always liked the large Preview Window and the ease of moving from viewing source clip to project preview by simple selection from the Navigation Bar below that display. The six-tabbed Step Panel along the top of the screen provides a mud map that, if followed in sequence, makes it simple – Wizards aside – to go from Capture to DVD without great difficulty.

In order, these tabs select the Capture, Edit, Effects, Overlay, Title Audio and Share steps. This sequence provides a logical workflow to follow in completing a video project and while most of these terms mean what you expect them to mean, Effects actually applies to transitions while Filters can be applied at any stage and are accessed by referring to the pull down Library menu immediately to the top right of the Preview Window.

In the lower part of the screen, the Project Timeline is the dominant feature and it is here that most of the editing action takes place. To its left is the control for ripple editing, a feature that was added in version 9 of Video Studio. This is a real boon in the later stages of arranging your project where it assists in keeping all clips in their correct relationship to each other when you have the urge to tweak something.

Above the Project Timeline is its Toolbar, which holds the view controls (see below), the zoom slider and a collection of icons for various Timeline-related functions. The Project Timeline can be used in three ?views?: Timeline, Storyboard or Audio. While most detailed work is done in the Timeline view, the Storyboard mode is great for sorting out clip order, if full page display if needed, or for manually inserting transitions.

Audio view brings up wave forms on the only four tracks that allow any audio editing and rubber banding. These include the main video first overlay, music and voiceover tracks, with only simple volume control being available for the others.

The other icons in the Toolbar all relate to functions relevant to what is displayed in the Project Timeline, but three deserve special mention, as they are new inclusions in Video Studio 10. These are the Smart Proxy Manager, Overlay Track Manager and Enable/Disable 5.1 Surround.

Designed to assist desktop PCs handle the editing load required for HD or other large files, Smart Proxy creates a smaller ?shadow? file of the originally captured video file and then converts it into a smaller ?working? format (MPEG1) and uses that to perform all the previews during editing. I was a bit offput by not seeing any activity while all this processing was happening, which is quite different to Media Studio Pro 8 where a progress bar is visible.

When the edited file is finally rendered, it is the original file that is used so that there is no loss of quality in the final output, but the processing load on the PC is much reduced during all preview processes.

The Overlay Track manager, whose icon is greyed-out other than when in Timeline view, introduces Video Studio into the world of multi-track editing, allowing a maximum of seven video tracks; the primary Video Track with six Overlay Tracks that include the Title and first overlay track seen in the default display. The audio is not spatially split from the video tracks as in some other suites, but displays the waveforms immediately under each respective video track in Audio view.

Finally, the Enable/Disable 5.1 Surround Sound switches between stereo and multichannel 5.1 surround sound to obtain more exciting and impressive sound for your production, if so inclined.

VS10 is easy to use and works well as a launching pad into greater video editing heights. By using the wizards or, for the slightly more experienced, following the Step Panel sequence, excellent results can be obtained. When in difficulties, F1 brings up the online manual which is easier ? but not more convenient ? to read than its paper counterpart. The program is stable, and offers a lot of pleasant filters and transitions to improve presentation.

I have always like Ulead?s Multi-trim function, where a large file can be broken into selected smaller clips. For this with earlier versions, I have used a great little device, the Contour Shuttle Express, which unfortunately for unknown reasons, will not work properly with VS10. SmartSounds Quicktracks is part of the package and makes it easy to tailor music to your production. Additional royalty-free music can be bought for a reasonable price to easily expand the provided collection. For those who like to capture movies from TV for later viewing (of course, where that is not in breach of copyright) VS10 has an automatic Ad Zapper that eradicates pesky advertisements and then merges the whole into one file again.

Animated titling, chroma-keying and an anti-shake filter are also part of the package.

DVD authoring uses a slightly scaled-down version of Ulead?s Movie Factory, and while not as flexible as some, it allows motion menus with music loops and is certainly a fine place to start DVD production.

Ulead VideoStudio 10 Plus would be an excellent entry point into video editing once the limitations of most software packages supplied with consumer cameras have been reached. The wizards ease the pain and reduce the slope of the learning curve while the Video Editor section introduces more flexibility and creativity in a palatable manner. There will be few individuals who will use this software to its fullest extent before needing to move up to a more sophisticated package.

The ability to change aspect ratios, use multiple overlay tracks, add 5.1 surround sound, use SmartProxy files and edit HD video all in what is called ?novice? software really shows how far amateur video editing has come in recent years.