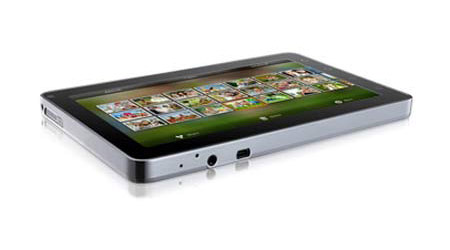 A recent price decrease now sees Viewsonic’s ViewPad 7 positioned between the premium and budget ends of the market, and it’s appropriate ground for this middle of the road tablet.

The design is Apple-inspired, looking more or less like an oversized iPhone 4, but forgoes a metal chassis for a combination of silver plastic and black glass. Weighted nicely at roughly 375 grams, the ViewPad feels good and fits well in the hand, although the glossy front and rear surfaces can make it a little slippery.

Luckily, Viewsonic has included a leatherette case in the box, complete with clips to hold the ViewPad 7 firmly in place for you.

Unlike other tablets supporting microUSB or their own proprietary connections (such as Samsung’s Galaxy Tab series or the Apple iPad), Viewsonic provides a miniUSB port for charging and transferring files, the connection found mostly commonly on digital cameras and card readers.

What sets the ViewPad 7 apart from the cheaper competition is a capacitive touchscreen that allows multi-touch gestures. The pleasure this brings to your interaction with any tablet cannot be underestimated and is worth the extra couple of hundred dollars.

Viewsonic’s implementation of the technology proved responsive, with all our shortcut operations translated quickly from the screen. Typing is a reasonably effortless affair too, with the capacitive screen providing a faster experience than what the budget tablet competition offers. No haptic feedback is provided, though, so it’s hard to know whether you’ve hit the right key without looking at the screen.

A few onscreen keyboards are offered in case using a QWERTY keyboard isn’t something you’re interested in. These were discovered accidentally as we swiped left and right while typing, and should satisfy users looking for a more phone-like experience.

The seven inch screen is bright and colourful, but the colours tended to head for the hills when viewed from any angle other than head on. Tablets, however, aren’t really intended for sharing, so the limited viewing angle shouldn’t be a deal-breaker and will certainly suffice for any solo viewing of video files and YouTube clips.

The tablet will, however, benefit from a pair of headphones or a set of moderately powered external speakers. You will also want to add a microSD card as fast as possible, because the 512MB of built-in memory is not enough to store much of anything you want to be as mobile as you are.

Much like every other Android tablet, the ViewPad 7 provides phone and SMS support, all of which has been implemented with little modification by Viewsonic. It’s very much a pure Google experience, and this isn’t a bad thing

Battery life is average, with us using it intermittently for around 18 hours before having to recharge. We’d suggest keeping yourself within reach of a power source when taking it on the road.

While Viewsonic has customised some elements of Android, it’s not been entirely sucessful. We expect, for example, Android 2.2 tablets to have buttons for menu, home, search, and back, but the icons Viewsonic has developed for these functions are not easily identifiable. We found we could access the functions we wanted only once we’d memorised what the icons are supposed to resemble. While this didn’t take long, it’s baffling to think why a brand would try and make their product harder to use.

We were also surprised to find the ViewPad 7 doesn’t support Flash, especially since the support is native supported by the ‘Froyo’ Android 2.2 operating system. An update might address this, and bring the ViewPad 7 into step with other 2.2 tablets but, again, it’s baffling why this feature should be disabled.

Outclassed by the competition when marketed at its original $700 price, the ViewPad 7 is now better positioned to appeal to tablet buyers unable to stretch to a premium purchase, but unimpressed by the poor screens on budget models. It won’t be comfortable here for long though, as other brands adjust their pricing in a similar way to make way for the entry of new and better spec’d models by mid-year.