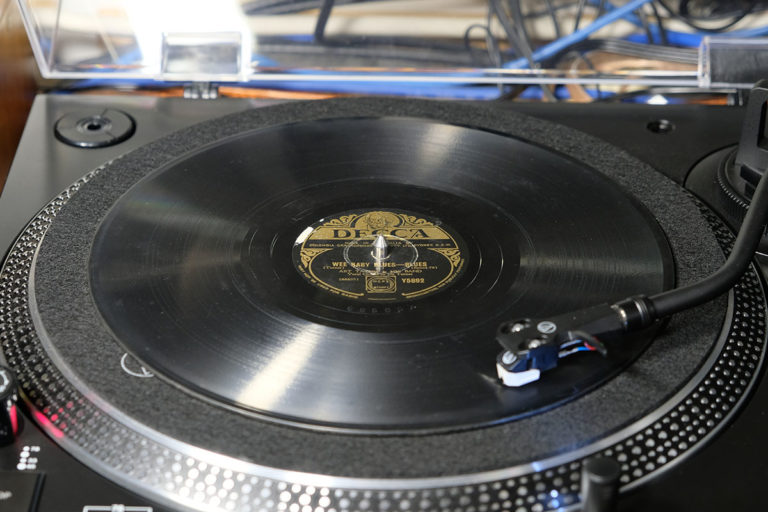 Everyone’s getting into analogue disks these days. Vinyl galore! But let’s go back further in time. 78s aren’t even made of vinyl. How to make those old 78s listenable? The Vinyl Record Cleaning System for 78s is an Australian development to achieve just that.

About the Vinyl Record Cleaning System

The Vinyl Record Cleaning System is an Australian invention. It’s straightforward. Instead of scrubbing the fragile grooves of a record with a brush or some such, with this system you apply a fluid called Easy Spread ’n’ Peel. Let’s let the company describe how it works:

VRC ESP is a proprietary formulation designed to dissolve the mixture of dust and dirt commonly found in a vinyl record groove. This mix will include all manner of oils and fats, finger grease, mould and mould spores, particulate matter such as stylus dust (ie diamond dust) and airborne dust. ESP emulsifies and breaks down the binders which hold this soiling to the record. Once the binders are broken down the soiling is dissolved into solution. This solution – or slurry – dries sealing the trapped impurities into a removable skin which can then be peeled off for a 100% clean. All ESP formulations create a barrier to static electricity, the primary cause of noisy records.

Got that? You apply the fluid, it dissolves all the gunk laying in the groove, then dries. You come back after it has dried and peel it off. All the gunk that it has dissolved thus also comes off.

All this is made easier by the other bits of the Vinyl Record Cleaning System. It comes with a turntable – unpowered, of course – which makes it easy to spin the record. The fluid. A little measuring cup/pourer. An applicator brush. Some stickers to put on the records that you’ve cleaned, and also a stylus tip cleaner. The one I used in this review is a little obsolete, since I’ve had it a couple of years. But the principle is the same. I’m writing about it here, now, because of ESP 78.

The core of the Vinyl Record Cleaning System: the several kinds of ESP

Remember, ESP is the fluid and the letters stand for Easy Spread ’n’ Peel. When I got the system there was only one ESP – well, the formula was still somewhat in development, so there were several versions in sequence. I gather things have settled down, and now there are four different kinds of ESP: ESP Restore!, ESP Revive!, ESP Refresh! And ESP 78.

And none of them should go anywhere near a 78rpm record

78s dominated the music business for half a century, but were rapidly displaced by the vinyl microgroove LP in the 1950s. For several good reasons. LPs sounded better. They could hold something like 20 minutes of music on a side, compared to 3.5 minutes. They were lighter, and while not harder as such, they were definitely less fragile. Drop a 78 on a hard surface and it will shatter.

You see, 78s aren’t made of vinyl. Nor any kind of plastic. Nor, indeed, any truly synthetic material. They are made with shellac, which you may know of as an old-timey lacquer. Shellac is a natural material. To quote Wikipedia, it is, “a resin secreted by the female lac bug on trees in the forests of India and Thailand.” This is flaked and transported dry. It is worked and shaped by being dissolved in alcohol.

Many record cleaning fluids use alcohol. Not a good idea to use them with shellac.

UPDATE: The Vinyl Record Cleaning System now comes without fluid and is priced at $149.95. So you can just buy only the particular ESP formulation that you need.

But does the Vinyl Record Cleaning System work?

The reason I have the older version of the Vinyl Record Cleaning System was because I did a piece a while back on record cleaning systems. At the time, I satisfied myself – and hopefully the readers – that it worked at least as well as four other systems, one of which involved a machine costing two thousand dollars.

Now, for a while I’ve been interested in looking into 78 records. Ten weeks ago I noted in my review of the Audi-Technica AT-LP120XBT-USB turntable that it was a rare machine in being able to spin 78rpm records. But you can’t use a regular stylus with 78 records. Their grooves are much wider (remember, LPs introduced the “microgroove”). So I ordered online the same cartridge used in that turntable with a 78rpm-ready stylus installed.

And then I bought a decent-sized lot of 78rpm records via eBay. These records had, apparently, been in good condition in the past. Their owner, long-since deceased, had good playback equipment and was a music enthusiast. But for at least the last couple of decades they’d been sitting in a garage in Sydney. By the time I got them, they were marked significantly in ways that suggested some kind of mould or mildew to me.

I brought them back home to Canberra – a road trip was necessary because Shellac records really are heavy. I weighed a few and they came in at between just under 200 grams and 260 grams each. Let’s say five per kilogram. And there were a couple of hundred of them in the lot.

How to fix the sound?

It was in googling around that I discovered that alcohol and shellac do not mix … or, rather, they mix all too well. Some sources say that you can clean them with soap and water and a brush, but others say that certain releases use a different method of construction, with a paper core, which is destroyed if exposed to water.

Searching the web, I found that the Vinyl Record Cleaning Company has a newly developed ESP specifically for 78s.

Which brings me to my test. It was simple: I used the Audio-Technica turntable to record to a computer a number of the 78s, uncleaned in any way except for the ritual application of a carbon fibre brush immediately before playback. Then I applied the Vinyl Record Cleaning Ssystem using the ESP 78 fluid, waited a while, peeled off the by-then-dried ESP and recorded the output again. Incidentally, the ESP 78 was easy to clean up. All that was required was a Chux and a bit of water. Even the brush washed out nicely, without any stiffness after it had dried.

You can see me applying and then removing the ESP in this video:

What difference did it make?

Now, what difference any record cleaning technique will make depends in large part upon the record itself. If it is already clean, then no record-cleaning system can improve it. But my 78s were all pretty dirty, with grime and apparent mould on their surfaces and appalling levels of noise. Here’s a snippet of Art Tatum and His Band performing “Wee Baby Blues”, before cleaning:

So, did the clean-up shown in the video work? It certainly did in terms of reducing the noise. A lot. Here’s the matching snippet after cleaning:

To present it visually, here’s the waveform representation of most of the track. First, the original:

And the cleaned version:

Let’s zoom in. Here’s just a few seconds of the original:

And the cleaned version:

What, not perfect you say? Well, of course not. For several reasons:

So, no, it’s not perfect. But what it is is listenable. You can hear the music with the noise only occasionally intruding, instead of dominating.

But let’s be complete. Perhaps the Vinyl Record Cleaning System only removed some of the dirt and gunk, not all of it.

Good point. So I repeated the process with this record: applied a new layer of ESP 78, waited a while for it to dry, then peeled it off. Recorded again, identified the same segment (to within 1/20,000th of a second) and compared. No audible difference whatsoever.

But perhaps I’d just reached the limits of the Vinyl Record Cleaning System and there was certain types of dirt and whatnot that it would not remove?

Okay, time to apply some warm soapy water to the grooves with a camel’s hair brush and give it a good scrub. Rinse, dry, record to the computer again. Exactly the same result. If the Vinyl Record Cleaning System does leave anything behind, it’s exceedingly hard to get it out.

… and also of your LPs. The performance was equally good with vinyl. And, don’t forget, this is an Australian business.