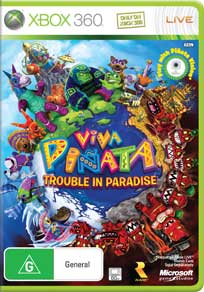 Now with 30% more sugary animal goodness, Viva Pinata: Trouble in Paradise takes the first game in the series and beefs it up, resulting in what many would say the original game should have been. Aimed, we believe, at a younger audience but actually a little too challenging and complicated for them, Viva Pinata tasks the player with developing a garden area and then enticing the extremely cute ‘Pinata’ animals over to it. Once you’ve done that, your job turns into keeping them happy and developing your garden further in order to attract the rarer and more elusive animals.

It all sounds quite simple in theory, but in practice the game is a little more challenging. Last time around, Viva Pinata divided the game-buying public, with the complexities of gameplay belying its causal appearance, and arguably only the more devoted and ‘hardcore’ gamers stuck with the game. This time, however, ‘Trouble in Paradise’ introduces several concepts that make your job a whole lot easier. ‘Co-op’ play is enabled now, but actions are turn based, rather than simultaneous, toggled by the ‘start’ button, so that’s not going to be as helpful as first imagined. Better, though, is the online functionality. Thanks to Xbox Live, you can ‘visit’ a friend’s Viva Pinata game and wander around their garden!

This ability makes it easier to make progress or, in game-speak, ‘level up’ in the game, because if you join other people’s gardens over Xbox Live, and they’ve set the permissions the right way to benefit you, your level raises quicker on the back of their achievements – progress by association! You also have the opportunity to visit the character ‘Gretchen Fetchem’ during your visit and she will fetch Pinata corresponding to the level achieved by your host. ‘Wild cards’ are also a lot easier to get, rewarding the player quicker with the cooler animals, and you can also buy Pinata from friends’ gardens when you visit, if they offer them to you, which is another shortcut to getting the animals you want without having to laboriously work through the system.

With Viva Pinata: Trouble in Paradise, there’s a far better array of PiÃƒÆ’Ã†â€™Ãƒâ€šÃ‚Â±ata than in the first game, with 32 new animals adding to the list, such as the super cool Yeti (Jeli) and Rhino (Limeoceros!). And aiming for even easier ‘accessibility’ is the ‘Just for Fun’ mode, which makes the game a hoot even for the youngest of players, giving them a heap of cash and tools and allowing them to just get stuck into the game, without having to worry about the management elements.

Overall, Viva Pinata: Trouble in Paradise is a superb game. It’s perfect for families and younger players, with its charming and fun subject matter and gameplay. There are several different ways to play, ensuring that everyone from complete novices to experienced gamers can enjoy the experience.