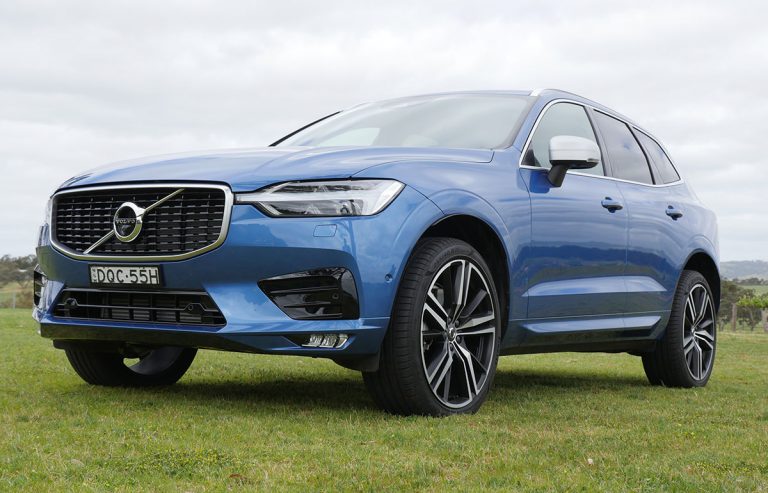 Volvo’s proceeding apace with the development of autonomous vehicles and promising that all its cars will be at least partially electric from 2020. Meanwhile, some of that work has fed into its brand new Volvo XC60 range. Yesterday I spent a couple of hours in and around Adelaide experiencing two different models of the range.

The Volvo XC60 comes with five different engine packages, in vehicles which exude luxury, smooth living and provide both a sense of, and practical features contributing to, safety.

Five engines might seem a lot, but they kind of make sense. All are based around a two litre, aluminium, four cylinder, four valve per cylinder, dual cam design. But two are diesel, and two are petrol based (yes, two plus two does not equal five, but I’ll get to that). There are three fitting levels: Momentum, Inscription and R-Design

The entry level model – the XC60 Momentum D4 – runs the basic (if one could consider twin turbocharged to be basic) diesel and costs $59,990. Fitted with the T5 turbocharged petrol engine instead, it costs $62,990. The higher level Inscription models with the same respective engines cost $66,990 and $69,990.

The more powerful D5 diesel and the more powerful T6 petrol engine are available only at the sport orientated R-Design level. The D5 produces 173 kilowatts of power and 480Nm of torque, compared to the 140/400 of the D4. The T6 petrol engine supplements the high rev turbo performance with a supercharger to boost things at lower revs, adding 50Nm of torque at 2100rpm to the T5’s 350Nm. Power goes up to 235kW from 187kW.

And then there’s number five engine package, the T8. It uses the same turbocharged, supercharged T6 engine, but it drives only the front wheels. It also packs an electric power plant driving the rear wheels. This is capable of delivering an additional 65 kilowatts of power and 240m of torque. One result is cutting the 0 to 100km/h time to 5.3 seconds. Another is cutting fuel consumption from 7.7 litres per 100km to a mere 2.1 litres.

That’s because it isn’t just a hybrid, with an itty bitty little battery assist, but a plug in hybrid with a 400 volt, 10.4kWh battery. Volvo says that, measured in accordance with EU regulations, it has a range on battery alone of 45 kilometres. We’re talking about a heavy vehicle here – they weigh between 1.9 and 2.2 tonnes, depending on the configuration – so that 2.1 litres per 100 kilometres must be based on you filling up the battery nightly from the power socket.

(Do you have a feel for battery capacity? What is 10.4kWh anyway? There are around 750 watts per horsepower, so this battery ought to be able to provide nearly 14 horsepower for an hour, or a hundred horsepower for more than eight minutes. That’s quite a large capacity in the world of batteries.)

No special Tesla-like power point is needed. Your wall socket can fill it up from empty in seven hours with a six amp current draw, and four hours at ten amps. (There’s also a three hour/16 amp mode, which would probably require a higher capacity circuit in your home.) The battery uses lithium ion technology and is located in the “central tunnel” of the car – more or less under the centre console.

The XC60 is available with Volvo’s IntelliSafe technology installed. The two main packages are IntelliSafe Assist and IntelliSafe Surround. Assist includes adaptive cruise control and Pilot Assist. We all know that you use cruise control to set your speed. The adaptive part keeps an eye on what’s in front of you. Pilot Assist also keeps an eye on the cars ahead of you and can help you match the traffic flow. It also watches the lane markings and guides you back if you wander out of yours. That works at speeds up to 130km/h – well beyond the maximum legal speed for most parts of Australia.

IntelliSafe Surround extends the car’s feelers in all directions, stopping you from bumping into cars to the sides, looking out for when you’re reversing and so on.

Then there’s City Safe Technology which keeps an eye on pedestrians and cyclists so you’re less likely to collect them. Volvo hails from Sweden, so that same “City Safe Technology” has been tuned to also watch out for moose. Or, more generally, it implements “Large Animal Detection”.

So the technology has sufficient smarts not just to notice that things are nearby but identify many of them. Alerts about everything, including inanimate objects would be maddening. So those moose, and other large four legged creatures are spotted and identified. It ought to work equally well with cows that wander onto the roadway.

But it doesn’t work with kangaroos. Yet. Volvo has gathered a lot of data on kangaroos around Canberra and is working on its algorithms. No promises yet, though.

Incidentally, one aspect of collision avoidance I like the idea of: it will preferentially brake, but if you take evasive action yourself by steering to dodge the object, the car will brake on just one side to increase turning effectiveness.

I did some driving of a T8 model – that’s the turbocharged, supercharged, petrol engine with hybrid support – and the T5 – turbocharged, and no electric motor.

Physically, both were very comfortable. And pretty much the same, of course. The ride was firm on the large rim, low profile Pirelli tires, but not uncomfortable. On the country backroads the grip was certain, with various smart systems controlling the drive train. I was never in danger of locking the brakes or either understeer or oversteer, but of course the cars have anti-lock and distributed braking to make sure none of that happens (short of utter driving insanity).

That screen – I think they said it’s a nine inch screen – is in portrait mode. It’s a touch screen of course, but unlike a lot of car head units, the touch works pretty much as smoothly and lightly as an iPad. A cut down version of the GPS display is also shown on the electronic instrument panel. The car detects speed limit signs and displays them on the instrument panel, on the GPS, as a red mark on the electronic speedo and on the heads up display.

That HUD is kept light, showing only current speed and the speed limit most of the time, and popping up GPS stuff only when a turn is nearing. Apart from that I found the GPS less useful that I would have preferred, with it tending to give warnings of turns very early – with hundreds of metres to go – and then a bit too late, when one has already positioned the car for the turn. A bit of tuning would help there.

The wealth of instruments did have me struggling a couple of times, although if one were my car I’d soon learn it all. I could not, for example, work out how to engage the cruise control (neither could the journalist also in the car). It seemed to toggle between off and speed limiter mode.

The lane assist was effective at keeping the car in the lane, although perhaps a little closer to the edges than I would have preferred. I’m not used to such assistance, so it was a fascinating feeling, having the car pull away from the edge of the lane. Not sharply, just gently. After a dozen seconds of no apparent user action, the car starts warning you that it wants you to take control, and cancels lane assist. When you’ve done that, it suggests that it might be time to “take a break”. Fair enough.

Things are interlinked of course. If you indicate right, then the car will happily drift over into the right lane without intervention.

Finally, performance. Even the T5 felt amply powered, while the T8 really kicked down hard. The latter was a touch grabby with the brakes for a moment until I got used to it. I expect that’s the interaction between friction and regenerative breaking.

The Volvo XC60 is roomy, safe, comfortable and fun to drive. What more can one say?