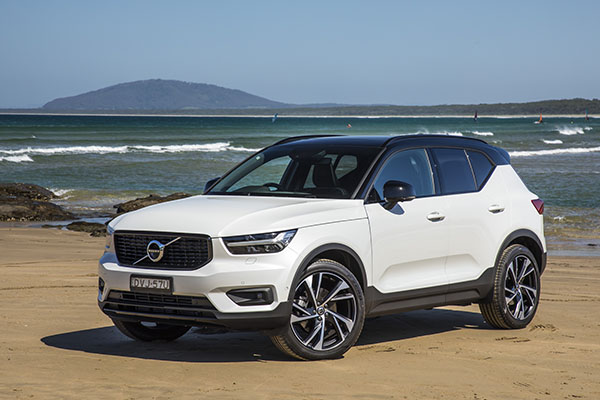 Barossa region, South Australia, 2 May 2018: Volvo has launched the third of its trio of SUVs in Australia. The Volvo XC40 joins the Volvo XC60 (see here for our thoughts on that) and the Volvo XC90. We can’t disagree with Volvo’s description. It says the XC40 is a “compact luxury SUV”.

It’s certainly chocka with smart and stylish design and modern conveniences. We put a few dozens of kilometres on the car’s odometer on the beautiful winding roads between Adelaide and Barossa. Volvo explained that the XC40 isn’t a small version of the XC60 or XC90. It is targeted at a younger, sportier market.

Rather than try to describe it, I suggest you have a look at the photos here. Volvo makes the carpets almost entirely from recycled plastic bottles. The only new material in them are the dyes. The burnt orange carpet option sounds lairy, doesn’t it? But it actually looked quite refined. And despite the materials, the carpet was soft to the touch.

There’s a bunch of useful little things in the Volvo XC40 that you don’t notice until you need them. For example, there’s a transparent ticket clip on the driver’s side of the windscreen. Use it to hold your parking voucher or vehicle pass. A hook folds out from the glove compartment lid and can be used to hang that Chinese takeaway, avoiding spills when you go around the corner. Likewise, five hooks in the luggage areas will stop your grocery bags from rolling around.

The centre console has enough room for a tissue box, and a removable box intended for waste, such as used tissues. (Apparently, this kind of convenience is big in the Chinese market.) There are good-sized door pockets in all four doors. Both front seats have storage trays under them for smaller items that you want out of sight.

There’s USB charging front and back, along with a Qi charging pad for suitable smartphones. There are cooling and heating vents for the rear. I spent some time in the back seat and can attest even with the seat in front of me pushed a long way back, I had plenty of leg room.

The Volvo XC40 comes in two basic models: the Momentum and the R-Design. The latter costs more and has some upgraded and additional features, along with larger wheels (20 inches versus 19) and lower profile tyres. Both come with the same engine options and transmission and both are all-wheel drive.

There’s also a two-litre diesel version. You can look forward to hybrids in the future.

Both models of the Volvo XC40 have … well, just about everything the way of driving aids. Some come with the base models. Some come as options. The City Safety module detects pedestrians, vehicles, large animals and cyclists, as well as possible collisions at intersections with “Brake Support; Steering Support”. In other words, the car will jump in if it thinks you’ve missed something. Likewise, it provides “Oncoming Mitigation”. That means, if someone’s coming at you headlong, it’ll try to reduce the violence of the impact.

The dashboard of the Volvo XC40 has an active display that changes according to driving mode. It was very clear, with the dial-look speedo just as crisp and clean as a mechanical one. But electronic flexibility lets it do so much more than a traditional instrument cluster. For example, the car watches out for speed limit signs and displays the last one on the panel, along with a red notch on the speedo scale. You can always see the current speed limit.

I think it also pulls that information from its GPS/Navigation system, although that would typically be less up to date. Sometimes it would put a kind of ghost speedo mark behind the current one so you can anticipate what’s coming. That was inconsistent though, but I figure that’s probably derived from the GPS/Navigation system.

The centre console display has a nine-inch vertical touchscreen. It also was clear and fairly easy to use … once we discovered am iPhone-like physical “Home” button underneath the screen. That display typically showed the GPS navigation system when we were using it. But the car also shows a cut-down version showing in the middle of the dash display.

The problem with driving a new car is unfamiliarity. Especially when there’s such a wide range of features. We spend the first eighty kilometres or so of the driving very impressed with the handling and grip. The car went around corners like a sporty car rather than an SUV. It remained impressively flat and stable.

The steering, though, seemed a bit light, and the motor seemed far to kick down to lower gears very readily. Given that there are eight forwards speeds, it was kicking down a lot. Then we discovered the drive mode button on the dashboard. We pressed that and the touchscreen showed the options. We were in “Comfort” mode, it seemed. Also available was “Eco” mode and “Dynamic” mode. “Eco” mode changes the tunings of various things to save fuel, of course, and it also replaces the image of the tachometer on the instrument panel with one of an “ecometer”.

“Dynamic” mode changed the behaviour and feel of the vehicle significantly. It generally chose a lower gear than “Comfort” mode for normal driving, and thus kicked down far less frequently, while remaining as responsive. Perhaps more so. The steering was now no longer too light. The suspension may have also hardened up just a little, but I was less sure of that. It certainly made for more fun driving.

We did no formal timings, but the Volvo XC40 pushed hard, so I’d agree with the claimed acceleration times.

There’s also a semi-manual mode, which you can use to select from the eight gear ratios.

Engine braking was not strong. I found it necessary to brake lightly in downhill conditions where with most other cars backing off the accelerator would have sufficed. I was unaware of that point about the “Hill Descent Control” function, so perhaps that would have helped.

The lane assist function is something I didn’t like, but I hasten to add that may be just me. I like to use a lot of my lane when driving, but this seemed to make the Volvo XC40 uneasy, with it wanting to push back away from the lane markings. I guess it thought I was getting too close to them. By “pushing back”, I mean the steering wheel was apply a gentle pressure in the direction it wanted to go. It was not a struggle to overcome it. It was just a bit disconcerting.

There’s also a “Launch Edition” for both models of the Volvo XC40. The Momentum version includes $10,200 worth of options including sunroof, tinted windows, adaptive cruise control, keyless entry and Harman Kardon premium sound. This version costs $5,000 more than each standard model.

The “Launch Edition” extras package for the R-Design model is smaller. That model starts more fully equipped. It adds only $1,750 to the purchase price for $6,670 worth of extras.

See what Volvo has to say about the Volvo XC40 here.