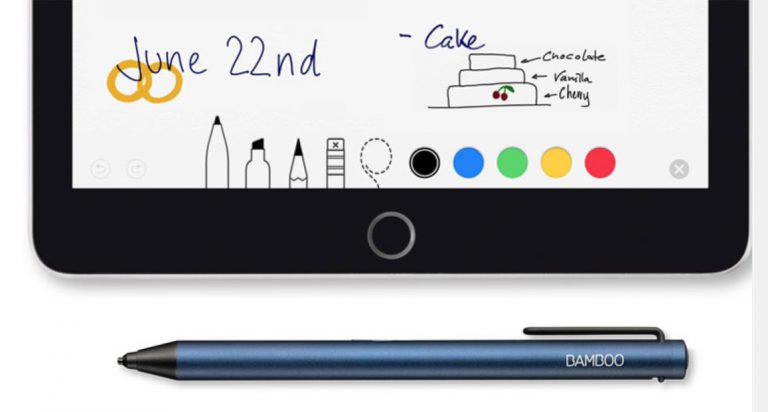 Wacom is famous for digitisers – things that allow artists, CAD, draftspersons, etc., to use a stylus and create ‘on glass’.

With the proliferation of Android smartphones and tablets, Wacom has released the jack of all styluses – the Bamboo Tip. It is a 1.9mm fine-tip, capacitive stylus for quickly noting ideas – it’s not meant as a pro drawing tool.

It has an attractive blue anodised aluminium pen-like body with a slim replaceable tip. A rechargeable battery (micro-USB hidden on the end) lasts for 20 hours.

You don’t pair it – rather the capacitive pen is compatible with most recent iOS and Android smartphones and tablets. You will quickly know if it is not compatible – at best it will act as a “finger” (e.g. capacitive stylus) on the screen.

There is also a switch that changes it from iOS to Android. I suspect this changes the ‘frequency’ of the electrostatic tip that interacts with the screen. The frequency helps the touch device discriminate between a fat finger and a slim Wacom Tip.

On a Samsung Galaxy Note 8 (that uses a stylus) it acted as a finger but would not draw on the screen as S Pen did.

On an HP EliteBook x360 1030 G2 (that comes with a pen) it did work when tested in Paint. This model uses a Wacom digitiser in the touch panel. I loaded Windows Ink workspace – the HP Pen worked, but the Wacom did not.

On an iPad, it worked, but you cannot rest your palm on the screen.

Now a small issue – if it does not work you may have to download the Wacom Bamboo Paper app. It is free but fairly limited to a blank note ‘sheet’ with two pen styles, three nib thicknesses and 12 colours/shades. Beyond that, you need to buy things like pencils, brushes, crayons etc.

It’s a fine-tipped capacitive stylus – far better than a rubber tipped stylus. Before you buy test it on your device.

As a fine tipped capacity stylus, it is fine. But the vagaries of using the product with multiple devices and different operating systems is an issue.

Also, check that it does the job you expect – it is limited to what a capacitive stylus can achieve on a touch, not a digitiser, panel, e.g. no pressure sensitivity, no tilt, etc.

And an independent review