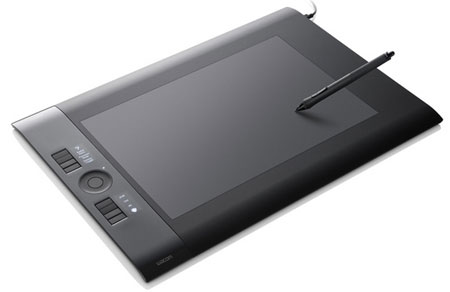 Wacom enjoys a virtual monopoly in the limited but vital graphics tablet market. Its cheap Bamboo series (starting at $129) lets anyone experience PC input and creativity at the tip of a pen, rather than through the mouse.

Intuos, however, is Wacom’s professional line, and as the name suggests, Intuos4 is the fourth generation of the successful tablet, used widely in a number of industries.

So why would someone at home want an Intuos4? It all depends on how seriously you take your creativity.

Intuos4 is a very different beast to Bamboo. For a start, the tablet surface offers a level of friction most like a regular sheet of paper – it feels very natural to draw on.

The surface also detects the tilt of the pen (up to 60 degrees), along with 2048 levels of pressure. That’s twice what the Bamboo and the Intuos3 can detect.

All Wacom tablets have buttons along the side you can map to shortcuts, but the Intuos4 not only includes an iPod-style touch wheel, but an OLED display that shows what each button is mapped to in the current application.

The pen maintains Wacom’s famous battery-free design, but now comes with four different nibs (stored in the pen holder) which transform the pen from a felt-tip to a pencil and more.

The tablet uses a single USB2.0 port, but does require the PC to supply power. Normally, this is a handy feature that saves on cables cluttering the desktop, but as creative types often uses a large number of USB devices (camera, printer etc) an auxiliary power port would have been welcome, should you run out of powered plugs.

Intuos4 supports both left- and right-handers: simply spin the tablet around and click the relevant box in the configuration menu.

Like any PC device, you install a set of drivers and basic configuration software, connect the tablet and you’re away.

The included software bundle gives an immediate taste of the tablet’s capabilities, though serious artists will want to splash out on the full versions of the trial and “light edition” apps on the disc.

Intuos4 is all about tactile feedback, and creating an experience that is most like drawing with a real pen on real paper.

The new surface combined with the range of included nibs makes this the best Wacom tablet yet. It’s overkill for touching up photos and simple Photoshop work, but if you want to spend hours creating digital art from scratch, this is the tool to do it.

By doubling the sensitivity, Wacom has created a much more subtle and nuanced device, allowing experienced artists to convert much of their pen and paintbrush technique to the PC.

The only real disappointment is a lack of onboard memory: it’s not possible to save the tablet’s configuration (sensitivity, custom button assignments etc) when you move it between PCs.

But the OLED display that labels your shortcuts is an excellent new addition, and the touch wheel makes flipping between layers or selecting tools quick and intuitive – no more grappling with the keyboard!

There is a chance that unless you’re a design professional, you may never use all of the features and capabilities the Intuos4 offers.

But if you consider yourself a serious artist, it’s worth the serious outlay. Newcomers are sure to be impressed, but even moving from Bamboo to Intuos4 will massively boost what you can do with your preferred art application – you may never use your old coloured pencils again!

Pricing note: There are several different tablet sizes available – this review, and its price, is for the ‘M’ size.