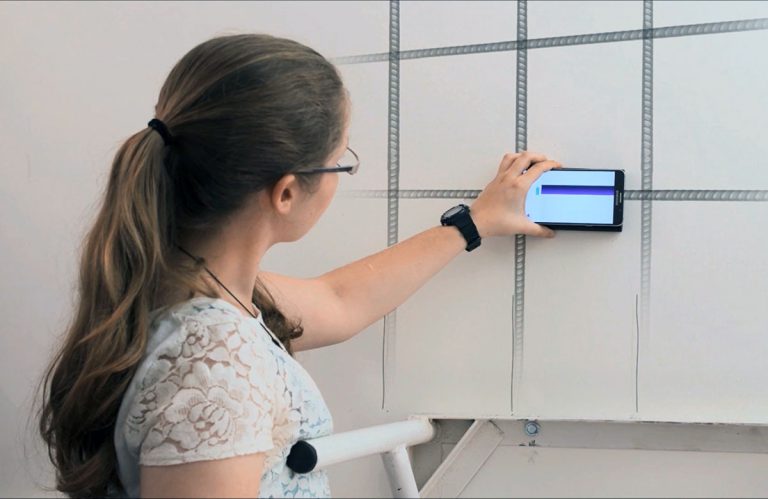 What’s a WalabotDIY? Potentially one of the greatest things ever for the home handy-person’s toolbox. Basically, it lets you see inside solid objects up to ten centimetres – around four inches – deep. Putting up shelves? Now you can find the studs. Worries about drilling into a wall because water pipes – or even electrical wiring – could be lurking in there? No worries any more.

The WalabotDIY is a small slab of a device about the size of a smart phone. Indeed, you need a smart phone to work it. Android only, though. And the phone must have USB On The Go functionality. That rules in all but the cheapest Android phones from the last few years.

The OTG is required because your phone supplies the screen used to display what’s hiding back there. More than that, it will also determine the depth of what it finds (so you can still drill in two centimetres – carefully – if the object is several centimetres deep). And you can slide the device over the wall, scanning a large area so your phone can display a composite of everying in there. A “map” the WalabotDIY people call it.

They say the WalabotDIY “can detect multiple studs, pipes and wires, follow the path of pipes and get a full picture of things that are hidden from view.”

The device is produced by Israeli company Vayyar which has developed the “breakthrough 3D imaging technology” used not just in WalabotDIY but devices for a wide range of applications, including security and health.

Do does it work? And how does it work? The video demos we’ve seen look pretty convincing and the company seems very reputable indeed. Unfortunately we won’t be able to lay hands on one to check it out for ourselves so we can’t, for example, see whether it can discriminate between a stud in the wall, and nails in the stud in the wall. Nor determine how precise it is.

As to how it works, all we’ve been able to glean is that it uses “RF technology”. Radio frequencies, huh? Some form of radar, perhaps, using very long wavelengths.

Anyway, Australian launch sees a special introductory price of $165, down from $220, into the new year. You can buy from walabot.com/diy.