Want to build your own robot? 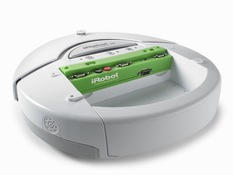 Ever wanted to build your own robot? iRobot Corporation has announced iRobot Create, a robot that lets you put your own personal stamp on a robot by adding your own sensors, computers, remote controls and more.

Based on the iRobot Roomba vacuuming robot platform, iRobot Create lets you send commands from a computer or more advanced programmers can add on a fully programmable iRobot Command Module for onboard control.

A variety of methods and programming languages can be used to control the iRobot Create. Access to all of the robot?s sensors and actuators over a serial port is provided via the iRobot open interface.

Novices can observe the robot?s behaviour in one of 10 demonstration modes or program the robot directly by downloading short scripts with any basic terminal program. More advanced users can write custom software using a variety of methods that take advantage of the robot?s ?streaming sensor data? mode for more control of the robot. Highly advanced users can write programs in C or C++ for the Command Module that attaches to the robot for completely autonomous behaviour.

The Command Module contains an 8-bit, 20 MHz (Atmel ATMega 168) microcontroller enabling full programmability of iRobot Create?s motors, lights, sounds, and sensor readings. The Command Module plugs into the Create robot?s cargo bay connector and provides on-board control with programs that can be written in C or C++. It has four DB-9 expansion ports for adding other hardware. As well it includes a Command Module CD (containing three example programs and the compiler), USB cable, and a quick start guide.