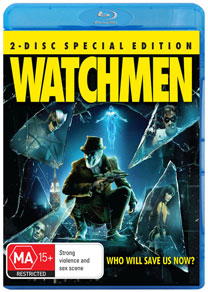 Venturing into the ever-treacherous waters of turning a big-boys’ comic (also optimistically known as a ‘graphic novel’) into a commercially successful film, ‘300’ Director Zack Snyder has big cajones indeed. Treating the admittedly excellent original material with an almost unhealthy reverence, Snyder clearly sets out to achieve a degree of authenticity that would please, or at least appease, the legions of unwashed superhero comic fans, going so far as to hire a physics and astronomy professor onto the set as adviser.

So what the devil is it, you ask? Well ‘Watchmen’ is a tale about ‘costumed heroes’ – note the significant absence of the prefix ‘super’ here – relating what their real lives might be like when all the pomp and hyperbole usually seen in superhero stories like Superman is stripped away. As such, the comic book, created by British writer Alan Moor and illustrator Dave Gibbons, emerges as a peculiarly serious, dour, introspective and downright depressing work of fiction that nevertheless boasts a credulity otherwise mostly lacking in the genre.

Violent, moody and brooding, ‘Watchmen’ is strictly for grown-ups (not least due to the frightening and virtually constant on-screen presence of Billy Crudup’s virtual manhood), exploring as it does themes of moral ambiguity, vigilantism and the abuse of power.

Demonstrating that there’s nothing as consistent as inconsistent behaviour, Paramount fail to ensure the provision of any exclusive bonus content for the Blu-ray version of the movie, although there is a number of vignettes and ‘webisodes’ – the latter pretty lightweight – on both disc releases. They suffer from some very haphazard editing, with several clips repeating across segments, but of these, the grammatically dubious ‘Mechanics: Technologies of Fantastic World’ is the most entertaining.

This is largely thanks to the presence of the aforementioned physics professor, one James Kakalios, whose affable approach to discussing the ‘legitimacy’ of the various technologies presented in ‘Watchmen’ is charming as well as fascinating. Allowing for what he calls ‘a one-time miracle exception’ to the laws of physics for each phenomenon, Professsor Kakalios goes through the fantastical stuff we see in the movie and decides whether each would otherwise be possible, subject to the laws of physics apart from that one exception. Dr Manhattan acquits himself well – he’s even blue for a very good reason, but we’ll let you discover that for yourselves.