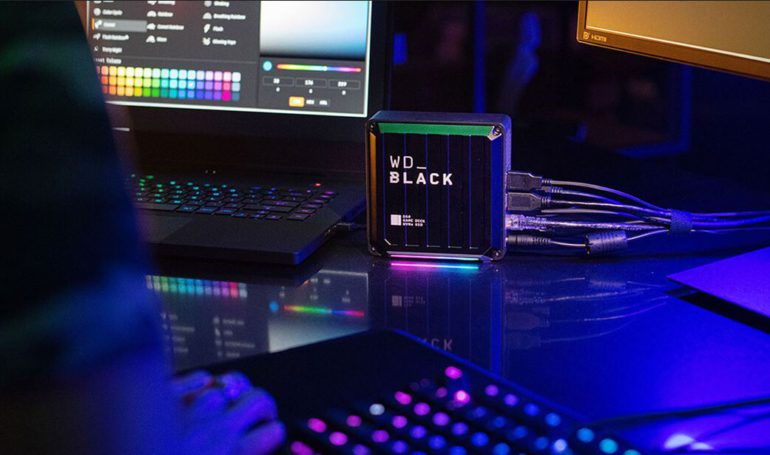 The WD Black D50 Game Dock is a Thunderbolt 3 (TB3) dock with an M.2 PCIe NVME SSD slot and a range of expansion ports including 87W upstream power for a laptop.

Well, perhaps that techy description does not do it justice. Let’s look at the non-game use cases for the WD Black D50 Game Dock.

The WD Black D50 Dock (1TB as tested) comes in 0, 1 and 2TB units. Apparently, the 0TB unit cannot be upgraded to SSD. That is a shame as you should have that choice like Seagate FireCuda Gaming Dock (8.8/10).

On upgrades, the WD Black is not meant to be opened. It has four screws on each left and right cover that don’t match the typical Torx screw designed to keep you out.

I know WD is going to kill me, but we found an unusual screw head in iFixit’s amazing Manta Driver Kit and well, could not resist a look inside.

The 1TB SSD is an OEM WD SN730 PCIe NMVMe Gen 3×4-lane. It has a big heatsink so we assume that you would need a heatsink on any other SSD. The 2TB uses the WD SN750 SSD.

Potential buyers can reasonably assume that it is upgradeable to larger capacities as they become available.

Speed – as fast as external storage gets

In a perfect world, the SN730, when used internally reaches 3400/3100MBps. As an external drive, the TB3 connection limits the bandwidth.

It is roughly 23/20Gbps, and that is about the limit of 40Gbps TB3 with display port, ethernet and USB overheads.

Note that the SSD temp reached 80° during heavy load and the fan did a reasonable job of keeping it stable. The outside temperature reached 38° – warm.

But apart from providing upstream charging to a Surface Pro 7 (3.2 Gen 2), it did not recognise anything else. Until proven otherwise assume it’s a TB3 only dock.

It has a Gigabit LAN port that allows you to disable Wi-Fi or Ethernet on the laptop. This could be useful for accessing the router at the best stable speeds.

Three choices depending on your monitor refresh rate and connections.

WD Black’s shipping container industrial style sets it apart. The unit is quite small at 120m square and 55mm high x .56kg – although it should sit upright so that the fan can effectively remove heat.

It has a 5- year limited warranty (depends on Terabytes written) so it’s a keeper.

The Dashboard is a black and orange overlay on the WD Dashboard. I am not saying its garish, but I am so over dark and brooding themes.

RGB control (Windows only) is for the LEDs at the bottom of the case. It has many pre-sets and support for Gigabyte RGB Fusion 2.0, MSI Mystic Light Sync and ASUS Aura, and Razer Chroma RGB.

A TB3 connection provides full-duplex 40Gbps (it is actually 4x8Gbps pipes) speeds. Once you dole nearly half that out to the second TB3 downstream port and distribute bandwidth to the SSD, the pipe inevitably becomes congested. That will happen with any dock with external storage.

Here we see the internal SSD bandwidth throttled as other devices need bandwidth. When fully loaded the SSD achieved 1900/1800MBps.

The Gigabit Ethernet port was rock solid on 1000Mbps. But when we added a UBS-C 3.1 connection to a Samsung Galaxy S20 Ultra and transferred 10GB of files it varies between 200-1000Mbps.

We did not repeat the ‘Game Mode’ tests, but I understand it optimises Ethernet and display priorities.

GadgetGuy’s take – gamer’s will love the dark theme and design.

I think the container looks great on any desk.

The USP is the additional fast 3000MBps 1 or 2TB SSD storage. Only one other dock, the Seagate FireCuda can do this.

Comparing it to the Seagate FireCuda, it matches all specs. The FireCuda has a 4TB HDD and an M2 slot for any SSD. Price-wise they are very close. Compared to the Firecuda I think the WD Black looks better and as long as it is future-upgradable (and I can’t be sure), it gets the tick.

Features
9
Value for money
8
Performance
9
Ease of use
9
Design
9
Positives
One of the few with external PCIe 3.0x4 lane SSD expansions
SSD should be user upgradeable
Small and light and love the container theme
Negatives
It would have been perfect with Intel Titan Ridge chipset
8.8