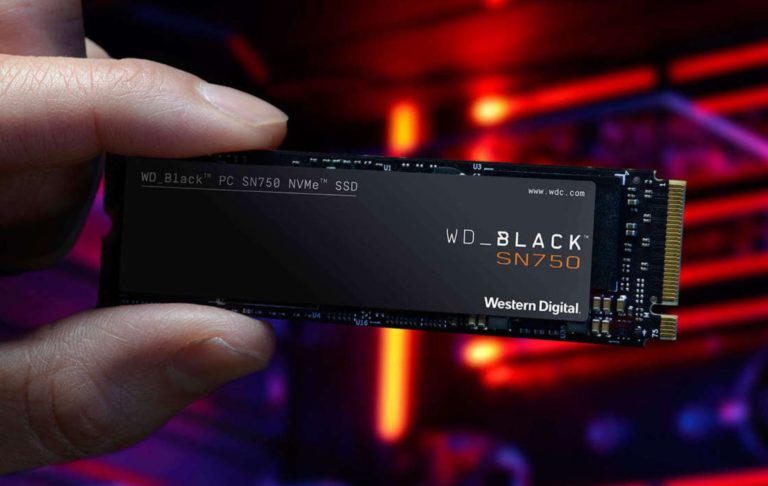 WD, you may remember it as Western Digital, has been quietly making a name for itself in the SSD space. The WD Black SN750 PCIe NVMe M.2 SSD is its fastest yet and optimised for large file transfer.

WD is/was a hard disk manufacturer. It has seen the light, and it’s a part owner of the Toshiba VNAND R&D and manufacturing facility in Japan. It sells consumer flash products under the SanDisk brand and SSD under four classes

Ironically we were testing the new Samsung 970 EVO Plus at the same time, and its goal is to be the fastest on the planet at 3536.2/3322.6MBps – it only just leads the class for flash!

What does that mean?

What this means is that we read/write a 1GiB file (1073.74MB) for one, eight and 32 repetitions and measure the impact of flooding the PCIe bus and the NVMe silicon.

So, while the Samsung 97 EVO Plus is line ball on the one random read/write repetition the WD can sustain nearly double the speed on eight and just edges ahead on 32 repetitions. Its controller comes from SanDisk, and it first reads/writes to the faster TLC (triple layer cell) NAND and then shuffles to the SLC (single layer cell) 3D NAND. That is its secret sauce for faster-sustained writes.

But it does come at a slight cost. Temperature under sustained load reached 75° at the controller. Typically, you will never achieve that unless you go into games mode – buy the heat sink version.

Confused at which is best – well don’t be.

All that means is if you were writing larger files, e.g. video editing or rendering the WD would be a gazillion of a second faster. And to upset the Apple cart a firmware update by either brand could change these readings yet again.

WD, like arch rival Seagate (with Barracuda and FireCuda), are later arrivals in the SSD market. So, what makes WD Black SN750 tick?

Black uses 64-layer, 3D VNAND. Samsung is now at 96 layers, but in essence, it is a lot of stacked capacity on the same chip size. This means a 1 or 2TB on single-sided M.2 with lower power draw and less heat.

A clean install or cloning

The best way to set up your new WD Black is a clean install. GadgetGuy has instructions here.

WD has disk cloning tools here but heed my warning – cloning reproduces any issues you may already have.

I have not tried Seagate’s Firecuda yet, but it is supposed to do 3450/3200MBps, so you are spoiled for choice at the premium end with three respected brands all vying for supremacy.

At this stage, I will say Samsung is the safest bet – if only because they have been doing SSD for much longer and design and make it entirely.

But that is not to rain on WD’s efforts – it too has a great Toshiba heritage, and it is a well-respected storage manufacturer. And its gobsmacking fast (as they all are).

Features
Value for money
Performance
Ease of Use
Design
Reader Rating0 Votes
An excellent PCIe NVMe built for maximum speed
Great WD support
It got a little hot under maximum load - if you plan to game buy the heatsink model
4.8