We got your vector, Victor. Anki’s new Vector robot 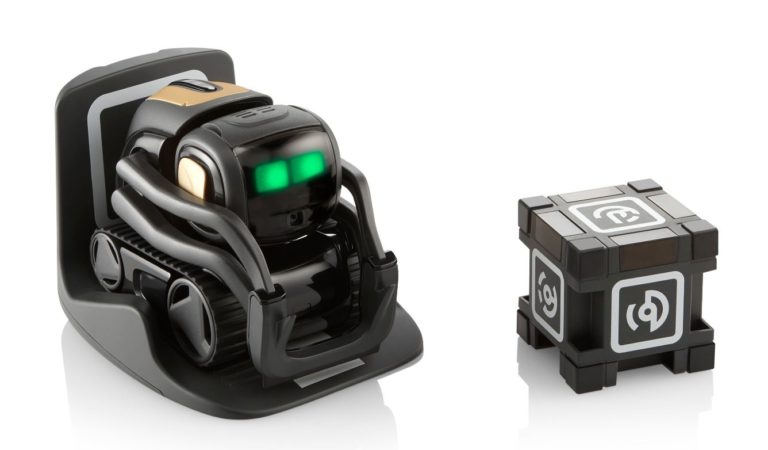 Anki’s mission is to bring objects to life through robotics and artificial intelligence, allowing people to build relationships with technology that feel a little more human. Vector, its new tabletop companion robot epitomises that.

I met with Mark Bradley and Charlie Hite from Anki who proudly demonstrated Vector. It is a tabletop companion robot. One that been developed over nearly eight years by a company founded by three Carnegie Mellon Robotics Institute graduates.

Mark was effusive, “A robot like Vector can have an amazing impact on our lives. He becomes a companion. He develops a unique personality after learning about you. It is a symbiosis of IQ (intelligence) and EQ (emotion) that make Vector different.”

Charlie ran Vector through its paces. Well as much as a small, fist-sized, robot has paces. “Vector is the result of all our experience with Cozmo, Overdrive and Fast and Furious robots. Where Cozmo was a toy, this is a real robot.”

“We added a sense of curiosity and adventure to the little fellow. He has AI to be aware of his surroundings and not fall off a table. He (yes, he is a he) recognises faces, and he is the beginnings of a personal assistant. No, he is not OK Google on wheels (well tracks) but he is smart.”

Charlie says the aim is to provide the privacy. He processes most things onboard using a Qualcomm 200 series System on a Chip. He can also access the Anki cloud for more complex things. We are not about monetising your data.

Vector is coming to Australia 13 October

He ships ship with one base plate charger (USB 5V/1A charger required) and one interactive Cube. Stockists include JB Hi-Fi, Australian Geographic, and Amazon.

GadgetGuy’s take. A robot but not as we think of it

I was impressed with the little guy. He exudes a personality and a persistence – ignore him at your peril.

He is still, in my opinion, a toy, albeit a sophisticated one. A fist-sized robot has its limitations. Fun first, function second. It will appeal to geeks and nerds, sorry early tech adopters everywhere and it’s not so expensive as to be a costly mistake.

Meanwhile below is a curated selection of information from the fact sheets.

A Giant Roll Forward for Robotkind

Vector is a robot who’s alive with personality, highly-intelligent, and aware of his surroundings through touch, sight and sound. He will fit naturally into your daily life as well as any space in your home, with minimal maintenance.

The little guy isn’t an appliance sitting in the corner waiting for you to flip a switch. He is an extension of your family who is excited for you to walk in the door each day.

He is designed to complement your life. And because he’s cloud-connected and able to self-update, he’s always getting smarter and adding new features. Under that polished exterior, he’s chock-full of robotics and A.I. tech.

Vector is fully autonomous, cloud-connected and always-on. While he is deceptively smart out of the box, he’ll only become smarter over time thanks to over-the-air (OTA) updates.

He wears his heart on his sleeve and isn’t shy about showing it on his high-res colour IPS display. With around a thousand animations, he reacts to his environment in a way that’s not only full of personality but also meaningful. He even responds to human touch, thanks to the capacitive touch sensor built on his back.

He is more than just a robot sidekick. He can help you become more productive by helping out with simple tasks. Ask him for the weather before you head out for the day, and he will answer you in his own, charming way. Cooking dinner? Setting a timer with Vector means no more overcooked meals in your future. You can even ask him to take a picture, and he will intelligently frame the shot by recognising the faces in it.

And just because he is a helpful robot doesn’t mean he can’t also have a little bit of fun. You can prompt him to play a game of Blackjack, and he’ll even use his accessory Cube to play a handful of games with you. If he hears music, he may even dance to the beat.

Vector’s brain is a Qualcomm Technologies’ platform that provides the connectivity, computing, camera and on-device A.I. capabilities that Vector needs to be smart, approachable and autonomous – without having to be tethered to a phone or requiring a permanent cloud connection.

He has an HD camera with 120° ultra-wide field of view that allows him to see the world, recognise people in the room, as well as learn the names of people he sees.

He uses an array of four microphones to hear and detect commands from you and your family and friends around the home. Just say “hey Vector” to get his attention and speak your command.

Vector already knows his limits. When he’s feeling tired or low on energy, he can locate and roll back to his charger. Four infrared (I.R.) emitter cliff sensors situated under the corners prevent Vector from falling off edges.

Vector has your security and privacy in mind. We developed and incorporated security features that strengthen robot security and minimise data collection for privacy so that you can have a safe and secure

An SDK — based on the Python language — will be available to all owners early next year. With the SDK, users will be able to harness his hardware and software technologies — from advanced facial recognition to a high-resolution colour screen — to augment their Vector experience in ways that no other consumer robotics platform offers.