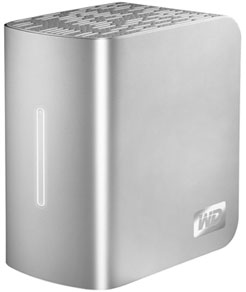 Now there’s simply no excuse for losing your data. With the price of storage dropping every day, it’s just plain crazy not to have a backup drive for your valuable data. And if you’re running out of space, it’s easier than ever to triple, or even quadruple, your computer’s storage capacity. With devices like Western Digital’s MyBook Studio Edition II, which stores an enormous two terabytes of data for about a quarter of what it cost a year ago, now is definitely the time to get it sorted.

Physically, the WD MyBook Studio Edition II is attractively styled in silver, as is about the width of a couple of hardcover books. There’s a long, white LED ‘disk activity’ light on the front fascia, which swishes up and down sort of like a Cylon’s roving eye from Battlestar Galactica. The LED will also give you visual indication of the space you’ve used up, provided that you are connected via Firewire or USB.

The top of the unit is extensively vented, and you can feel the warm air rising out if you place your hand over it. As hard disks generally produce quite a bit of heat, good case ventilation is essential and can prolong the life of the drives inside. Cooling is especially important with this particular unit because there are no internal fans. As a result, the MyBook is very quiet, and certainly doesn’t sound like a vacuum cleaner – unlike some of the fan-driven units out there. On the downside, if a drive gets too hot, it may induce early failure. Good thing that the MyBook has a power saver mode, which reduces the temperature by shutting the drives down when not in use.

The best thing about the MyBook Studio Edition II is its massive storage capacity. It wasn’t long ago that two terabytes was more than many medium sized companies had for their entire operation. As the space is actually spread across two hard disk drives, which appear as one, RAID technology provides you with the option of deciding how the space is used. If you don’t know what RAID is, it’s a set of standards for storing information across multiple hard disks.

What this offers is better performance, and also redundancy if a drive fails. For this unit, the options are RAID 0, which basically makes the two drives appear as one, giving you a massive 2TB of space to play with. Data is ‘striped’, or stored across both drives, which increases transfer speeds. This is ideal for people who need to copy large files, such as content creation specialists.

However, if you choose a RAID 1 configuration – you should seriously consider doing this – the content of one hard disk is mirrored by the other. While this cuts your usable space in half to 1 terabyte, it means that if a drive fails, (and trust me, they all fail eventually), all of your data is recoverable from the remaining working disk. While RAID 1 isn’t infallible, the chances of both drives failing at once are pretty remote.

Another plus about the WD MyBook Studio Edition II is the broad connectivity support. There’s USB 2.0, Firewire 400, Firewire 800 and eSata connections, and all cables are included in the box except eSata, which is a bit of a shame.

Ideally, the WD MyBook Studio Edition II is a good match for creative professionals who need a combination of lots of storage space and speedy performance. Also, while 2TB is a lot for a personal user, the price is pretty good so you’ll be able to house amazing amounts of music, HD video and photos. If you chose RAID 1 mode, your precious memories, bank details and the like will have that extra element of security.

In terms of disk transfer speed, I’ve tested this unit connected to a fileserver, in RAID1 mode, and it took a reasonable 41 minutes to transfer 50.5 gigabytes from an internal hard disk. I used a Firewire 400 cable, so if you have a Firewire 800 or eSata option, copy times will be even better. Bear in mind, however, that these times will vary depending on the speed of the drive that you’re copying from.

The supplied software makes it easy to configure the RAID type, plus the WD Anywhere Backup utility manages where your files are stored – on any device or network drive. Both Mac and PC versions are included. For added peace of mind, there’s also a lengthy five-year warranty.

This review is of the 2TB version of the MyBook Studio Edition II, which has an RRP of $699. A 1TB version is also available, for $369 RRP.