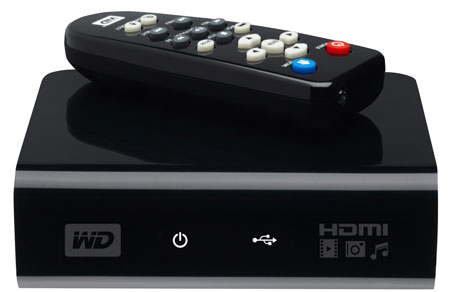 Western Digital’s WDTV offers a simple way to view digital multimedia files – music, photos or video – direct to pretty much any TV. It’s not as fully featured or lust-worthy as a DLNA solution, but it does a cracking job of just getting the task done.

Our first impressions of the WDTV were, it’s got to be said, not that positive. Specifically, the main unit is a tiny plastic box that looks rather cheap and shoddy. Connections are an interesting mix, with cruddy composite video sitting directly next to a full high definition-capable HDMI port. Only composite leads are provided, so factor in the cost of an HDMI cable of you want to realise better quality images on your telly.

The WDTV’s main job is multimedia playback, and it does this purely through USB sockets on the side and rear that can accept any flash or USB-powered external drive. Not surprisingly, Western Digital would prefer it if you used one of its drives, but we had no problems with a range of units from various manufacturers. The provided remote is short, stubby and easily lost.

The WDTV supports playback of photos, music and video, with a wide range of formats supported. On the video side, it’ll natively support MPEG1/2/4, WMV9, AVI (MPEG4, Xvid, AVC), H.264, MKV, MOV (MPEG4, H.264), MTS, TP and TS files with the capability to play back 1080p content. There’s no inbuilt DRM support, however, so you’ll need to use unprotected files only with it.

Western Digital does provide ArcSoft Media Converter 2.5 to convert files to formats that the WDTV supports, but we still managed to find a few files in our collection the unit didn’t like.

The really nice thing about setting up the WDTV is that it’s extraordinarily simple. Plug it into your TV, plug it into the power and chuck a USB stick or drive into either slot, or both. Initial indexing can be a touch slow on some larger drives, but once that’s done the interface is well laid out and efficient.

At the same time, that very simplicity brings a significant drawback compared to other media playback devices. There’s no provision for Ethernet, so no streaming from DLNA compatible devices. While that dodges some network headaches, it does mean that absolutely everything you play back on the WDTV will have to be copied to a portable drive first, then carried to the WDTV for playback, connected, indexed and then finally played. It’s not a critical flaw – and for the asking price we’re not too concerned by it – but it’s worth mentioning.

As a simple setup for media playback – whether it’s to show off your home movies and photos in the lounge room or push your files via sneakernet to a bedroom TV – the WDTV performs admirably at a no-frills level for a no-frills kind of price.