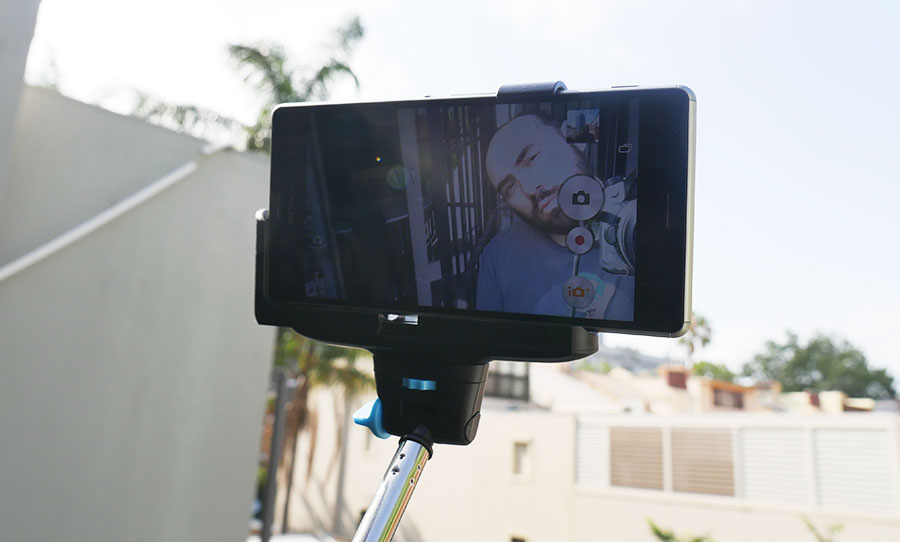 What is a selfie stick? (and why many are using it wrong)

One of the questions that has populated our social feeds the past few weeks appears to be something many are seeing around the world: poles that hold people’s smartphones that allow them to take a self-portraits from afar. But the selfie stick is more than just a pole, and there’s a better way to use it than what we’re seeing.

It has to be one of 2014’s craziest concepts, and it’s one that raises a question of just how much we like to take photos of ourselves (and a deeper question underneath that one), but it’s a concept that has permeated stores and the online world with plenty of clones.

It’s called the “selfie stick” or “selfie pole” and essentially, it’s a small handheld monopod with a smartphone clamp at one end to hold your smartphone.

We first started seeing the selfie stick used with GoPro cameras earlier in the year, and now with smartphone clamps available that support more than just the smaller iPhones, we’re seeing this concept make its way out to phones.

But it’s more than just a stick with a smartphone clamp, as you need to be able to trigger the shot, and for that, you need a button.

At least one, anyway.

As a result, selfie sticks include a button and some Bluetooth connectivity, charging like most other Bluetooth gadgets over microUSB and connecting to a smartphone by telling the handset that it is an input device, generally masquerading as a new volume button that also selects things.

For many smartphone cameras, the volume rocker is a camera button, or can be setup like that (changed in the settings of the software), and when the phone is paired with this specific external Bluetooth-controlled button, you can fire the camera remotely.

You still have to be in the app to do this, but if the camera is set to use volume as the shutter, you can take pictures without actually touching the phone.

And that’s kind of the point of the selfie stick: you’re not holding the phone, but are clamping it in a makeshift tripod-head and holding it far from your body, so you obviously won’t be able to reach the screen or a shutter button, so you need something else to do that for you, which is what the button is for.

But we’re not sure everyone is holding the selfie stick right to begin with.

The majority of people we’ve seen with the selfie stick have been holding the gadget with the screen aimed at them, making it possible for themselves to see how they’re positioned in the shot as they take the shot.

It’s like looking at a far off vivid mirror of yourself, and a mirror that can snap that image and capture what it sees, making a self-portrait that’s more than just an up, close and personal picture that requires a beauty mode to blur out those pores because cameras are sharper than ever.

Smartphones can do this better than any other device due to their front-facing cameras, but not all front-facing cameras are created equal. In fact, few smartphones available today sport high-end cameras, and so we think people should be using the rear camera to take the selfie with a selfie stick, and here’s why:

A rear camera is usually a higher megapixel and supports a lower aperture, while also including better imaging sensors than their front-facing equivalent, so you have more camera guts here. There’s also a relatively wide lens here, and partnered with a long reaching pole — the selfie stick — and the camera button, you’re not at risk from losing yourself from the image.

Just aim it at yourself and take the shot, and you’re pretty much guaranteed to be in a photo that you can crop without risk of pixelation.

About the only thing the rear camera won’t give you is an LCD to show you what you’re looking like, and we’re not sure this is even necessary.

Do you remember when people used to take photos without an LCD screen? This is sort of what you’ll be doing here, and if you have friends nearby, they can jump around to the other side of the phone and see what the screen looks like, telling you if the shot is good to go.

Or you can just take the picture anyway, because it’s just taking up space on your phone, and you can delete them whenever you like.

Up close, the image from the front-facing camera (above) is softer and less vibrant than the image from the rear camera (below), with the only shooting difference being that we couldn’t see the bottom image being shot when we pressed the shutter button.

The exception for using the rear camera comes through specific camera modules on smartphones, such as those with a rotating camera, those with a zoom lens, and smartphones with reasonably high megapixel front-facing cameras.

For instance, if you have a rotating camera, like found on the Oppo N1 Mini, you don’t need to worry about equipping the smartphone with the screen not facing you, because you have phone that only has one camera, albeit one of a particularly notable quality that can change its position to face either the front or the back.

As such, you merely need to rotate the camera to face the front — just like the screen — and voila, you have a higher megapixel front-facing camera.

If you have a smartphone with the heart of a camera — like what Samsung produces in the S4 Zoom and the K Zoom handsets — pressing a button that substitutes the volume button may result in a zoom occurring, so we’d try it first to see whether the shutter can work, and if not, stick to using the front facing camera. The last thing you’ll want is the optical lens to open up and have you not see yourself while the camera isn’t following your orders.

Smartphones with higher megapixel front-facing modules also don’t really need to heed our suggestion that the camera be positioned with the rear facing you, and that’s because their cameras are so decent that it can be like shooting with a rear camera anyway.

How high a megapixel amount constitutes which phone this works with can vary, but given that Instagram generally can shoot holes in anything below 3 megapixels, we’re thinking a minimum of 3mp should be the guide, meaning phones like the HTC One M8 (5 megapixel), Samsung Galaxy Note 4 and Galaxy Note Edge (3.7 megapixel), Huawei Ascend Mate 7 (5 megapixel), and HTC Desire Eye (13 megapixel) are all great cameras this should be fine with, while the 2 megapixel shooters provided by the Samsung Galaxy S5, Sony Xperia Z3 and Z3 Compact (and the Z2), and countless other updates barely scrape by, though we’d probably aim the bigger cameras your way, anyway.

But smartphones like the Apple iPhone — any of them, really — are basically stuck with a 1.2 megapixel camera, and while you can position yourself better with the selfie stick, you’re still just taking a tiny picture of yourself if you aim the screen your way.