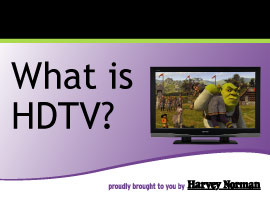 High definition television, or HDTV, uses digital technology to deliver a sharper, more realistic image, one that makes ordinary television pictures look soft and fuzzy. HDTV shows are broadcast in widescreen format, are often coupled with a 5.1 Dolby Digital soundtrack and, because they are transmitted digitally, never suffer from ghosting or snow like many analog broadcasts.

Together, the true-to-life images and surround sound of HDTV create an experience that is akin to having a commercial cinema in your own living room. Sport, wildlife documentaries and movies, in particular, look fantastic in high definition. And high definition is made for viewing on a large screen; in fact the bigger the better.

In the same way that mobile phone services switched from analog to digital, so is television. The transition commenced in 2001, and everything currently broadcast in analog is also being broadcast in digital. The complete switchover to digital is scheduled for 2012, so eventually all television in Australia will be digital. In short, digital TV (DTV) is the way of the future, and HDTV is a major feature of digital TV.

An onscreen guide to upcoming programs, news and weather that you can view while watching TV

SBS and ABC each provide two digital TV channels, the secondary channels broadcasting time-shifted programming from the main free-to-air channel, with up to 30 specialist channels possible from new broadcasters from 2007

Subtitling of programs for the hearing impaired

In the future, interactive TV (iTV) will allow you to interact with what you see, enabling you to, among other things, participate in quiz shows, do the shopping and the banking, hire movies and play games without leaving the sofa. Some programming already includes an interactive component that you can access through your remote control

The great thing about high definition TV is that you get all the benefits of standard definition TV too. This is because equipment capable of receiving HD broadcasts is also designed to receive SD broadcasts, meaning you get two types of digital TV in one.

So high definition takes Australia?s favourite appliance, the TV, and makes it do what it does better (and who wouldn?t want a better mousetrap?). But while we?ve given you a good picture (sorry!) of the attractions of high definition, words are no substitute for actually seeing and hearing the difference HD makes to your television experience. So don?t hang about; get yourself down to the local electronics store for a demonstration.

With an analog transmission, TV signal quality degrades the further away you are from the transmission source, and with every piece of equipment involved in getting the image and the sound to you. Even the weather and geography interferes with the quality of picture you receive from an analog transmission. A digital TV signal, however, produces sharp, clear pictures. Provided you have good-quality equipment, a digital picture should look the same on your set at home as it did in the studio. If you lose a digital signal, though, you lose it completely. There?s no snow or fuzz as you?d see with a weak analog signal, it?s either all or nothing.