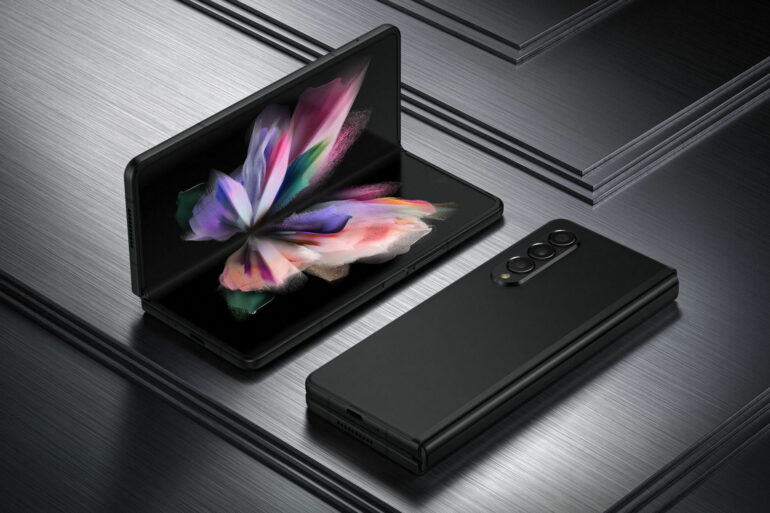 Foldable phones take the form of a regular-sized display that folds down into a compact footprint… or even cooler, put a gigantic folding display inside a productivity phone that can fold so it’s no bigger than a regular phone.

For the last few years, the same glossy slab of mini-computing tech has given us upgraded resolution, power, cameras and security. Sure, these are all great features that have made our phones better and better… but exciting to look at? Not so much. Foldable phones bring that excitement back.

That said, having a folding display isn’t just about the wow-factor. It brings real benefits and helps bridge that gap between your phone and your laptop.

Why fold your phone?

Put simply, foldable screen technology is all about maximising display size while minimising footprint. Your phone spends a lot of its time in your pocket or bag, so there’s an upper limit to the physical size of these things – also, get too big and your phone just becomes a tablet!

A foldable phone can give you the productivity and entertainment benefits of a bigger, near-tablet-sized display, but when you’re done, you can fold it up and slip it into your pocket or bag.

We’ve probably found the maximum screen size for a non-folding phone which is anything under about 6.8 inches. That’s a good size for a lot of daily use, but it’s still juuust a bit cramped to do a lot of other stuff, especially creative tasks, productivity like spreadsheets, and only some of us can tolerate reading on a ‘page’ that small.

The inner display of a foldable like the Samsung Z Fold 3 is a much more expansive 7.6 inches. Remember, this is a diagonal measure, so you get a LOT more screen space on that big display. Plus, it’s closer to a square, which gives you more flexibility in arranging apps, using split-screen options, and so much more.

And it’s not even just about using the display folded flat. The ability of the hinge to hold on an angle so the phone can sit propped up, opens so many other possibilities for entertainment apps, hands-free video calling, and much more!

Folding tech is tougher than ever

It’s perfectly natural to wonder ‘how do they DO it?’ when it comes to foldable phones. After all, the display on your old smartphone shattered into a hundred shards of nasty, and all you did was get it caught in the taxi door. So, how can a folding display NOT be super fragile?

Well, as mentioned, foldables are in their third generation now, and that means improvements in the unique protective coatings on the folding display, and for the case that this display is built into.

Let’s take the Samsung Z Fold 3 as an example. Inside, the main display has a splash and scratch resistant coating that protects the display while open. The hinge for the phone is now stronger, and the external case is made of what Samsung calls Armour Aluminium, while the external display is behind Gorilla Glass Victus (Corning’s latest tech).

It means the hinge doesn’t need nasty rubber gaskets and seals which look bad and can perish with all that opening and closing.

In short, a foldable phone now designed to be as durable overall as any phone. You need to take a little bit of care with the internal display, but protecting that big, beautiful display is a big part of why the phone folds!

Folding tech is about more than foldable displays

Companies like Samsung could have engineered a folding display into a tough case and left it at that. But the integration of the folding display leads to innovation in the features of the phone overall.

Let’s stick with the Z Fold 3 as the example phone here. One of the most immediately noticeable things about the inner display is that, at first glance, there doesn’t seem to be a selfie camera. But you can make video calls while looking at this display. That’s because the selfie camera is hidden, so there’s no dot or cut-out for the camera (of course, once you figure out how it’s hidden, you can see where the camera is… but it’s a lot less intrusive than on other phones).

Something that’s new for the Z Fold 3 is that the front display is full-size, like a slightly narrow normal phone. When the first Z Fold came out – and on other foldables too – the assumption was people wouldn’t see much benefit in having a full screen on the front AND an even bigger screen inside. But now we’re up to third gen of these phones, we know that we love our big external screens, because you can quickly do a little messaging, social media posting, and of course make calls, using that more traditional smartphone experience. It’s also become clear that the big foldables are used as productivity phones – that’s what people want them for, so many are adding support for stylus. In the case of the Z Fold 3 that’s the S Pen, which has various other functions too thanks to its Bluetooth receiver.

It can be a regular phone you hold to you ear like a normal person, it can be a tablet, it can even be a little laptop that connects to a projector and then you run your presentation using the S-Pen as a pointer and “next slide please” clicker.

Are you ready to switch to a foldable phone?

It can be tricky to decide if you’re ready to make the switch to foldable. After all, these are premium devices and they carry a premium price. But is a foldable phone really MORE expensive, if you consider what it can save you?

If you are all-phone, all the time, and use your phone as your main screen for everything – communication, social media, mobile gaming, as much work as you can stand on that cramped little space – then foldable is pretty much made for you.

But what if you don’t use your phone for ‘business’ all day? Well, foldable might still be a better choice for you, especially if you love reading, or like to watch a lot of TV and movies curled up in your own little zone.

The large inner display even folds in the middle like a book, and you can set e-reader apps to split the text across two pages… or just keep it all in the middle, however you like best! (That’s the advantage over a ‘real’ book – you can bump the font size up temporarily if you’re super tired.)

A big foldable like the Z Fold 3 is also a great choice for photographers, because along with the powerful rear cameras, that bigger internal display makes processing and editing them a less squinty-pinchy experience. You’ll find the more powerful photography apps easier to use, too.

Oh, and let’s not forget that as flagship phones, the best foldables come with 5G – naturally! So that’s faster data speeds for doing all the extra stuff you’ll be able to do on your amazing new foldable phone.

The Galaxy Z Fold 3 really does epitomise the top-tier of what it means to be a foldable phone right now. As well as 5G data, an increased screen size, and that bigger external display, the Z Fold 3 brings Samsung’s S Pen to foldables – which is a big deal for productivity.

You can choose from a couple of Z Fold 3 bundles that include S-Pen Fold (designed just for the Z Fold 3), or the more powerful S-Pen Pro (which you can pair with more than one Samsung device at a time).

Finally, the new form factor of foldables mean a rethink of how phone warranties work. The Z Fold 3 has a one-year hardware warranty that includes one free replacement of the inner display, should it be broken for any reason.