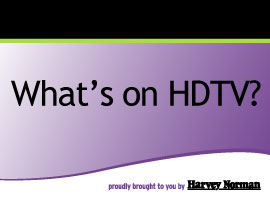 Most stations already transmit more than this minimum, with daily news and current affairs, games, breakfast and morning shows from the major networks recorded in dedicated high definition TV studios. Increasingly, local drama is being produced in high definition, and with HD taking off around the world, many popular international programs are produced in HD as well.

HD programming is viewed on dedicated HD channels belonging to each of the networks, with Nine and Ten broadcasting in 1080i, the ABC in 720p, and SBS and Seven in 576p. When there is no HD programming the networks typically broadcast standard definition shows that have been upscaled to HD, although in regional areas the Nine and Ten affiliates generally transmit demonstration video of Australian and international scenery. Upscaling can?t add picture detail that?s not there to begin with, but it helps create a smoother image that does look better than standard definition.

The amount of high definition programs available to watch for free on TV is increasing, and includes popular local and international shows such as Heroes, Sunrise, Desperate Housewives and Prison Break.

The Digital Broadcasting Association www.dba.org.au lists the HD programs being broadcast by the major networks.

Pay TV is going HD too, with Foxtel planning to launch two channels next year. And with Microsoft?s Xbox 360 console, and the Sony PlayStation 3 (PS3), you can also enjoy high definition gaming with surround sound.

Best of all are the two new disc-based high definition formats. They look like DVDs, but Blu-ray and HD DVD, with their matching players, deliver startlingly improved reality onto your screen, especially if you have a large one.

What?s more, the PS3 will be able to play Blu-ray movies straight out of the box, and Microsoft?s add-on HD DVD player for the Xbox 360 allows it to playback movies on HD DVD. With either of these consoles you get a killer high definition gaming and movie machine in one.

PS3 and Xbox 360 games are delivered in high definition, with full surround sound to boot.

The internet is a rich source of high definition video too, with movies, music clips, trailers and other types of content available. The major high definition web video formats are Microsoft?s Windows Media Video (version 9 and above) and DivX HD. Download one of these video files and, provided your monitor has adequate resolution, you can enjoy high definition right on your computer screen.

Alternatively you can connect your desktop or laptop up to a high definition projector, LCD or plasma TV and enjoy it on the big screen. You could also download trailers and movies in DivX HD or Windows Media Video 9 format and burn them to a DVD, or buy them on disc directly from the official websites. Your DVD player, however, needs to be compatible with the formats in order to play them.

As for HD on the go, you can transfer downloaded Internet video from a computer to a portable media player to watch wherever you are ? just don?t expect to get the full knockout effect of HD on such a small screen.

At the moment there aren?t many Blu-ray or HD DVD movies available for purchase ? around 120 titles. But that?s what it was like back ten years ago when DVD first became available. Don?t worry. Most of the major studios are fully behind one or the other of these formats (several are behind both), and are committed to releasing many new movies in these formats at the same time as their DVD versions.