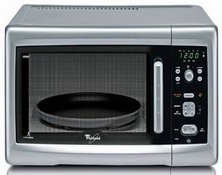 Whirlpool has announced new crisp grill and convection microwave ovens that are claimed to cook meals in minutes without sacrificing flavours usually associated with long periods of cooking in conventional ovens.

Whirlpoolls crispp technology uses three sources of heat to surround food, said to cook equally throughout the dish and ensuring no cold spots. These heat sources include a non-metallic crisp plate that preheats up to 210 degrees in two minutes and allows users to use metal cookware; the quartz grill, located in the inner roof, designed to evenly grill the top of dishes. The third heat source is microwave 3D technology which is said to distribute energy uniformly throughout the oven cavity.

New models available in May 2007 include the VT256 Vitesse 24 L Crispp microwave, available in white ($369 RRP) or silver ($399 RRP). In addition to the crispp function, it offers a steam setting which adds 100 ml of water, brings it to boiling point and steams food. The Vitessees jett menu automatically selects the most appropriate heat settings for each dish. The jet menu includes jet defrost which Whirlpool says is up to eight times faster than traditional defrosting.

The next model in the range is the JT359IX Jet Chef 31L Convection and Crisp Microwave ($749 RRP), targeted at larger families. Touted to make a sponge cake in eight minutes, it has a 31 L capacity, LCD control screen, a drop down door plus crisp, steam and jet functions. It uses Whirlpoolls 6th Sense technology which automatically assesses food and adapts power settings throughout the cooking process.

Each Crisp microwave comes with a crisp plate, steamer kit (with strainer and doser), a recipe book and DVD with recipes and step-by-step cooking guides. The Jet Chef comes with its own custom made baking tray.