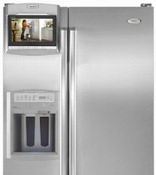 Whirlpool has announced a side by side refrigerator with an interchangeable interface that allows you to charge and play a variety of consumer electronic devices from the fridge, entertaining guests while you cook.

Whirlpoolls centralpark connector allows users to charge and play a range of electronic devices on your fridge, including MP3 players, mobile phones and DVD players.

Whirlpool North America president, David Swift, described the centralpark port as a concept will help remove benchtop clutter, allowing consumers to use their CE devices at eye level even when they are being charged.

The company said that major brands will be compatible with the centralpark connector which will be available in the US in late 2007. Whirlpool is working with electronic product solutions company Jabil to bring the concept to life. No Australian release dates have been announced.